The Women Who Owned the Women in Whites JBF Gala

What Lady Chef Debate? The Women Who Owned the Women in Whites Gala 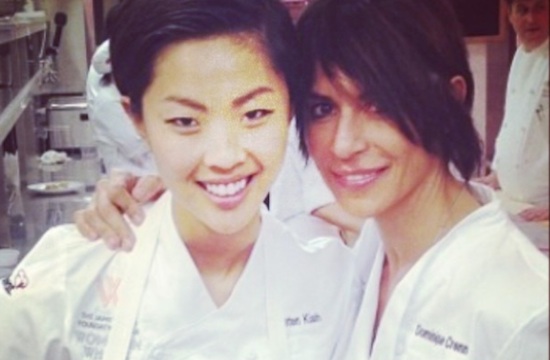 God bless you, James Beard Foundation, for giving some talented women their due.

At last night’s Women in Whites gala — which, in retrospect, the good people at JBF must be thanking the assholes out there for making it such good timing to recognize lady chefs — there was no shortage of talented lady chefs (and lady TV stars). On the docket were many JBF winners, and lady chefs who’ve already shot to the top: Dominique Crenn at Atelier Crenn, Kristen Kish at Menton, JBF winner Barbara Lynch at No. 9 Park, JBF Winner Melissa Kelly at Primo, and even Pegu Club’s Audrey Sanders. Oh, and shout outs from Martha Stewart and Gail Simmons — and Tyra Banks was there? Crazy. As told by Twitter and Instagram:

On the menu at the gala: razor clams made by Crenn, foie gras terrine made by Kish, and white truffle gnocchi (OMG) made by Lynch. And just because we love the description so much from JBF:

James Beard was a passionate champion of female cooks. Many of the women he supported, like Julia Child, M.F.K. Fisher, and Alice Waters, went on to become some of the most legendary figures in American food.

In honor of the accomplishments of women in our industry, the theme of the 2013 James Beard Foundation Gala is Women in Whites. We’ve invited some of the country’s most talented and successful female toques to craft an unforgettable multicourse meal, which will be complemented with exquisite pairings from renowned female winemakers.

RELATED:
TIME Magazine Writes Article About How Their ‘Gods of Food’ List Excluded Women, Eats Itself
The New York Times Does The ‘Lady Chef Debate’ Right by Actually Asking Female Chefs for Their Opinion
After Reading Amanda Cohen’s Response to TIME, We Declare Her Ruler of Lady Chefs