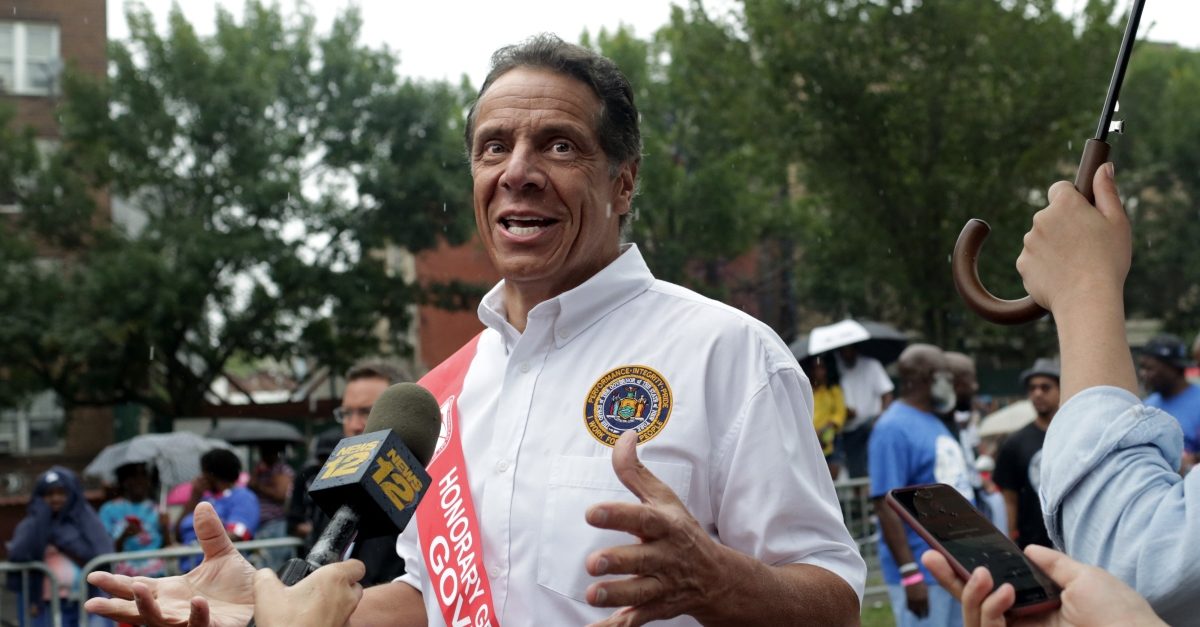 The unnamed aide said the incident happened when one of Cuomo’s top staffers, Stephanie Benton, contacted her to say the governor had requested her by name to assist him with his phone in the governor’s mansion. She said Cuomo began touching her as soon as she arrived.

“That wasn’t just a hug,” the woman said in an interview with the Albany Times Union. “He went for it and I kind of like was, ‘Oh, the door is right there.’ … I was mortified that a woman who works here is going to come in and see. … I was terrified of that happening, because that’s not who I am and that’s not what I’m here for… I said to him, I said, ‘You’re going to get us in trouble.’ I didn’t know what else to say. … It was pretty much like ‘What are you doing?’ That’s when he slammed the door [shut]. He said, ‘I don’t care.’

“I remember exactly what I was wearing,” she added. “I remember him slamming [the door] so hard that I remember thinking to myself that I’m sure the staff is, like, ‘Is everything OK up there?’ He came right back and he pulled me close and all I remember is seeing his hand, his big hand. I remember looking down like, ‘Holy sh*t.'”

She said one of his hands grabbed her breast, while another went under her shirt.

Cuomo, 63, has served as New York’s governor since 2011. He was married for 15 years to Kerry Kennedy, a niece to the late President John F. Kennedy, until their divorce in 2005. He has faced numerous allegations of sexual harassment since another former aide, Lindsey Boylan, lodged the first claim in November.

The woman who spoke out on Wednesday became Cuomo’s sixth accuser last month after her allegations were uncovered as part of an investigation into Cuomo’s behavior spearheaded by the state’s attorney general.

“I was just so confused and so taken aback by it,” the woman said. “He never said anything, which was odd. At this moment, I don’t know what to say — I don’t know what to do. Now my hives are coming out. I’m, like, swearing in my mind. I remember I walked out and he walked back into his office. … I remember going downstairs and escorting myself out and going to my car and sitting there for a second and going, ‘OK, I have to now go back into the Capitol, go back to my desk and do my job and pretend that, like, that didn’t just happen.’

“I didn’t have another choice. I remember (thinking), ‘You have to pull yourself together … even if you have to sit here for a couple minutes to do that,'” she said. “If I told someone, I’m done. And who do you tell?”

She also claimed that his behavior was calculated, and that it escalated over the years. “It was never in front of anybody. He made sure that it was either at the mansion or, if it was at the Capitol, that no one was around,” she said. “I remember thinking one time Stephanie was around, or (Secretary to the Governor) Melissa (DeRosa) was around, and I had been so used to him getting up and hugging me that when he didn’t I said ‘Hmm.’ It felt calculated — he would totally act different.”

An attorney for Cuomo, Rita Glavin, denied the allegations in a statement on Wednesday. “The people of New York know the governor — he has spent 40 years in public service and in the public eye. He has repeatedly made clear that he never made inappropriate advances or inappropriately touched anyone. The attorney general’s review of this claim and others, including evolving details and new public statements by complainants or their surrogates, must be thorough, fair and provide the truth.”