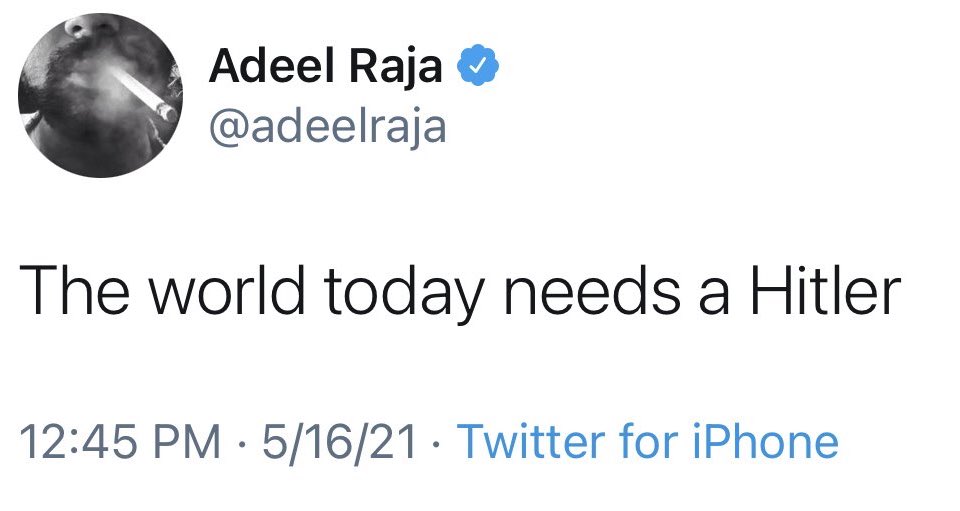 On Sunday, Adeel Raja, a freelance writer based in Islamabad, Pakistan, tweeted, and then deleted, the above comment that “The world today needs a Hitler,” and CNN has now cut ties with him permanently.

After the Washington Examiner reported on Raja’s tweet (originally posted Sunday afternoon and deleted a few hours later) more tweets by Raja were found with anti-Semitic content or that praised Adolf Hitler.

In another now-deleted tweet, Raja retweeted former Vice President Mike Pence’s tweet saying “America stands with Israel,” with his comment, “A history of creating terrorists and standing with them!”

Raja also voiced his support for Germany’s soccer team in a July 12, 2014 tweet during the FIFA World Cup, writing, “The only reason I am supporting Germany in the finals – Hitler was a German and he did good with those Jews!” A tweet the next day said, “Hail Hitler!”

Until these tweets were reported, Raja’s Twitter bio listed him as a “Freelance Contributor at CNN.” That information has now been removed from his profile. Raja has contributed to approximately 50 articles for CNN since 2013, with the most recent one being published on January 16, 2021.

Reached for comment, CNN spokesman Matt Dornic told Mediaite, “Adeel Raja has never been a CNN employee. As a freelancer, his reporting contributed to some newsgathering efforts from Islamabad. However, in light of these abhorrent statements, he will not be working with CNN again in any capacity.”

This article has been updated to reflect that Raja’s most recent contribution at CNN.com was in January of this year, not last September.