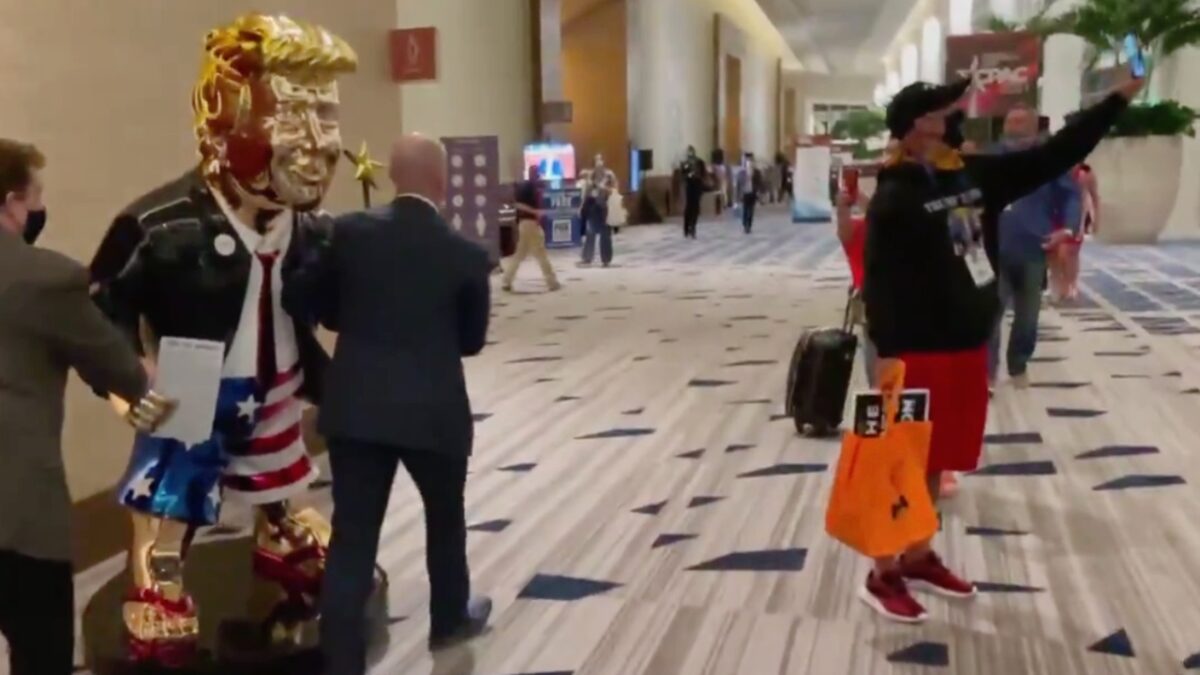 Donald Trump has united thousands of Americans — in mockery of the squat golden statue of his likeness that was caught on camera being wheeled around the Conservative Political Action Conference (CPAC).

Bloomberg reporter William Turton captured the video — featuring a squat statue of a golden Trump garbed in a business suit and Rocky Balboa’s boxing shorts and red flip-flops, brandishing what appears to be a magic wand and a non-disclosure agreement, being wheeled through the event as attendees can be seen taking snapshots and cooing things like “Awesome!” and “That’s so cool!” and “Four more years.” — and posted it on Thursday night as part of a thread on CPAC happenings.

The spectacle prompted mockery from the left, right, and center of blue-check Twitter, much of it with a distinctly Biblical bent.

tfw when you come down from mount sinai and the kids are misbehaving. https://t.co/Y6Vbzkmejx

it could be worse. it could actually be calf-shaped. https://t.co/8X3jCZukM2

As many people have noted in the replies, it appears the conservative “Christians” of the Trumpian right have gone all-in on worshipping their golden calf. Perhaps @marcorubio can recall the appropriate verse in his tweets… https://t.co/8WA1i1oBdw

We always knew these MAGAts and evangelicals were fake Christian heretics. They finally broke out the golden calf.

Honest question: have these people read the Bible? https://t.co/Iiaoji9AzA

The golden calf of the GOP. https://t.co/RH2RS72PPv

They’ve literally made a golden calf! This would be a good time for CPAC attendees to read the Second Commandment and Exodus 32: https://t.co/9YSpx0yiTu. https://t.co/xwM1WJULmW

Completely normal. Not batshit crazy at all. https://t.co/N72sFcSyI9

I’m not Christian but I am aware of the story of the Golden Calf. Yet Republicans… aren’t? It’s beyond parody but also terrifying. https://t.co/TUrhnUEgIm pic.twitter.com/kbcpyZLtLL

Oh this is so very on brand for cpac
pic.twitter.com/iW7K4Xgxsm

The phenomenon turned “Golden calf” into a top trending topic, and probably a while lot of clicks to the Exodus blog.