WATCH: Here’s the Fox News Segment That Made ‘Attack and Dethrone God’ Trend on Twitter

The phrase “Attack and Dethrone God” caught the imagination of Twitter Friday night after it was included in a graphic on the Fox News show The Ingraham Angle.

As outrage was spreading over a Fox News graphic that depicted stock market performance  after the killings of Dr. Martin Luther King, Jr., Michael Brown, and George Floyd, as well as the Rodney King police brutality verdict, another Fox News freeze-frame was being roundly mocked on the social media site as well.

The graphic in question is from a segment in which host Laura Ingraham interviewed author Terrie Turchie, who equated the current unrest over the killing of George Floyd with the 60’s Weather Underground.

During the segment, Ingraham read along with a graphic that claimed part of the group’s mission was to “Attack and Dethrone God” — a phrase that does not appear in the manifesto Turchie cited. 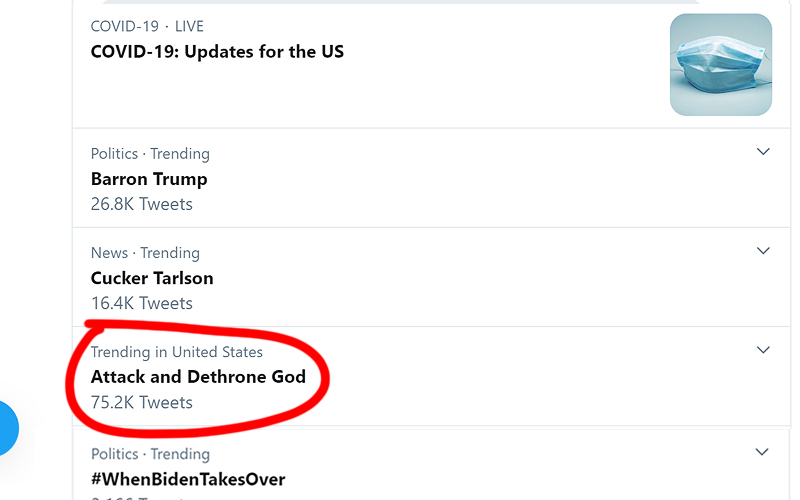 The jokes came fast and furious, providing hours of mockery and entertainment.

Dear Fox News: no, we’re not trying to “attack and dethrone God.” We’re trying to vote out an asshole who’s hiding in a basement.

This is literally my Saturday calendar, except before I Attack and Dethrone God I’ve got to get to UPS. They close at 3 pm on the weekend. pic.twitter.com/eRkMyt8mxe

Does “Attack and dethrone god” really mean “vote Trump out of office” pic.twitter.com/jnAFHWvRbT

Me and the boys attempting to attack and dethrone God pic.twitter.com/UMy2Yca2yL

So "attack and dethrone God" is trending because a guy went on Fox News to wildly misrepresent an obscure 1974 Weather Underground manifesto and claim it's the playbook of the Trump-era Democratic Party? I know as a historian, I should be fascinated, but I'm mostly just tired.

when you see ATTACK AND DETHRONE GOD trending and remember sony trained us for this pic.twitter.com/QN2JfexFlH

when you attack and dethrone god pic.twitter.com/kWiym6k5JX

sorry I can’t Zoom tonight, I have to attack and dethrone god pic.twitter.com/G3A0olwbT3

I personally prefer to dethrone god first and then attack him.

Damnit. My secret plans were leaked. I’ve been organizing for years but my plan to attack and dethrone God has been outed.

I would’ve gotten away with it if wasn’t for those meddling Fox News Pudits. *shakes fist*

Watch the full segment above via Fox News.