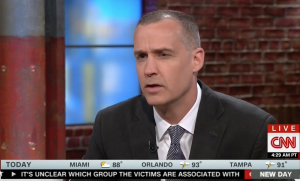 CNN must have been well aware that hiring Trump’s former campaign manager ​Corey​ Lewandowski as a political analyst would create a row. Maybe that knowledge propelled them to move forward​, even if a bit hastily​. But the vast majority of critics seem to be missing the most salient and disturbing​ reality — that they have just hired another talking head to spew, or at the least defend, statements and/or “positions” that would never be deemed acceptable on major national television networks under any other circumstances.

Fox’s Megyn Kelly and Howard Kurtz offered a small sampling of the various critiques echoed throughout media circles ranging from the fact that Lewandowski ha​d​ regularly threatened journalists (he was even arrested for assaulting one, before that charge was dropped), to the fact that he can’t and won’t offer any sort of “objective” analysis. But, of course, as a Trump supporter he isn’t expected to present objectivity. As Politico’s Jack Shafer accurately points out:

​”​The revolving door between TV punditry and politics has become so well-established by this point that it was inevitable that somebody from the Trump orbit would be drafted as a talking head.”​​

​So true, except that putting aside the revulsion certain CNN journalists will feel having this media misanthropist joining them on set, that analysis glosses over the substance of what he will be defending and saying. Before conservatives and liberal journalistic purists unite to burn me (or at least my ​anonymous being) at the internet stake, let’s examine this by taking a step back for a moment: A​ major political figure pronounces overtly that we should discriminate against an entire religion, accuses Mexicans of being “rapists and criminals,” questions, without any ​real ​evidence, whether ​the President was born in this nation and ​is ​​a United States citizen​​​​​​​​ and later suggests that the same President may actually be in cahoots with the terrorists​​. To top it off, he presents various unfounded conspiracy theories and regularly makes ​assertions that are entirely inaccurate. Allowing the candidate himself to appear and then challenging those proclamations is one thing, but to suggest that those bigoted and false statements are open to debate by providing “both sides” presents a warped reality that should trouble any journalist​ or journalistic institution. Our networks have standards and practices manuals that are being effectively shredded by allowing these surrogates to advocate and repeat bigotry and factual fallacies.

Think of it in a completely different context. What would happen if the CEO of a global, publicly traded company determined that based on the criminal actions of certain Jewish lawyers at other companies, he would stop hiring any Jewish lawyers until “we can figure out what is going on.” After all,​ the CEO maintains, a disproportionate number of Jews are lawyers and therefore likely lawyer/criminals as well. Said CEO’s future, or lack thereof, would be infamously cemented. Would that ​ever ​be treated like ​some​ ​sort of debatable question? Generally when CNN or any other network allows bigotry to be spouted on their networks, they do so just to swat it down.

Trump supporters will undoubtedly claim that ​my​ position is some toxic form of liberal bias (which by the way, the media does have),​ a way to be unfair to Trump himself and his candidacy. ​But no, this is something far more treacherous — a reflection of how far the networks have strayed​ from journalistic norms in an effort to be “fair” to Trump. Not straying to the right, but straying ​t​o the wrong, allowing bigoted, conspiratorial claims often with no basis in fact to be repeated to their national audiences. This isn’t about politics and its not even about Cor​e​y Lewandowski​​. ​It is ​about the remnants of journalism or to be even clearer, it’s about ​facts versus unfounded suppositions, its about ​bigotry versus tolerance. That should never be two-sided.