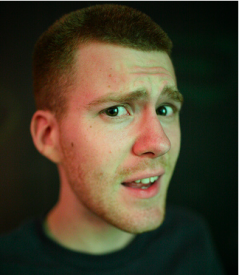 Nick Douglas has spent a lot of time on the Internet. Douglas was the founding editor of Valleywag, Gawker Media’s Silicon Valley blog, and is the now senior editor of the AOL blog Urlesque. He also penned the definitive book on Twitter. Yes a book! This week he, along with artist Erin Fusco, launched Big Damn Deal a webcomic about a San Francisco startup described to us as the story of a startup run by con men.

Says Douglas: “It’s an adventure story that will try to do with comics what so many artists have done with film: Excite the viewers, send them on a caper, show off some beautiful locations and make them root for the heroes. I’ll be poking fun at the youthful arrogance of many startuppers, the idiot-savant nature of journalists, the impossibility of any statesman to live up to our standards, and the constant warfare of fiefdoms that influences tech culture, city life, and our lives, more than we like to admit.” We hear a hobo who looks like Nick Denton may make an appearance sometime circa Week 4. We figured it was the perfect time to subject Douglas to our infamous 5QQ.

I grab my phone before I’m out of bed – usually before I put my contacts in – and check Gawker, Google News, and Techmeme, in no particular order. Then Reddit once I’m up.

Team Gizmodo or Team Apple
Team Apple, but I hate most of my teammates.

The Double-Down! I mean, a fast food chain issued a slightly more unsavory product than usual, with fewer calories than comparable sandwiches from Burger King and McDonald’s! That’s huge! It’s almost a fifth as disgusting as the previous KFC monstrosity that Patton Oswalt called a “failure pile in a sadness bowl”! I’m shocked that we only got two solid weeks of obvious Dane-Cook-level jokery out of the introduction of a mundane-looking fast food item, because nothing else happened in the news this month.

I tried journalism, but accuracy and fairness bore me. I’d rather just turn everyone into a character and write romans à clef.

I’m worried about journalists following the lead of bloggers. And I’m very worried about bloggers who don’t know how to ask someone to comment. At Urlesque.com, an AOL blog about internet culture that I edit, we’re pushing our writers to make more value adds in our content, and often that means simply emailing the person who uploaded a popular YouTube video and getting some background. Otherwise you’re just parroting bullshit, and Digg can do that more efficiently.