Actor Jason Alexander Apologizes For ‘Gay’ Cricket Joke: ‘It Is Not A Question Of Oversensitivity’
Video

Actor Jason Alexander Apologizes For ‘Gay’ Cricket Joke: ‘It Is Not A Question Of Oversensitivity’ 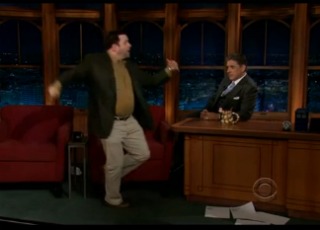 Actor Jason Alexander has apologized for calling cricket a “gay” (as oppose to “manly”) sport during a recent appearance on CBS’ Late Late Show with Craig Ferguson.

Facing some backlash for his joke (and subsequent pantomine of a “gay” cricket pitch), Alexander later issued quite a thoughtful and candid apology via Twitter.

Shortly after that however, a few of my Twitter followers made me aware that they were both gay and offended by the joke. And truthfully, I could not understand why. I do know that humor always points to the peccadillos or absurdities or glaring generalities of some kind of group or another – short, fat, bald, blonde, ethnic, smart, dumb, rich, poor, etc. It is hard to tell any kind of joke that couldn’t be seen as offensive to someone. But I truly did not understand why a gay person would be particularly offended by this routine.

However, troubled by the reaction of some, I asked a few of my gay friends about it. And at first, even they couldn’t quite find the offense in the bit. But as we explored it, we began to realize what was implied under the humor. I was basing my use of the word “gay” on the silly generalization that real men don’t do gentile, refined things and that my portrayal of the cricket pitch was pointedly effeminate , thereby suggesting that effeminate and gay were synonymous.

But what we really got down to is quite serious. It is not that we can’t laugh at and with each other. It is not a question of oversensitivity. The problem is that today, as I write this, young men and women whose behaviors, choices or attitudes are not deemed “man enough” or “normal” are being subjected to all kinds of abuse from verbal to physical to societal. They are being demeaned and threatened because they don’t fit the group’s idea of what a “real man” or a “real woman” are supposed to look like, act like and feel like.

For these people, my building a joke upon the premise I did added to the pejorative stereotype that they are forced to deal with everyday. It is at the very heart of this whole ugly world of bullying that has been getting rightful and overdue attention in the media. And with my well-intentioned comedy bit, I played right into those hurtful assumptions and diminishments.

For reference, have a look at the original segment, via CBS: