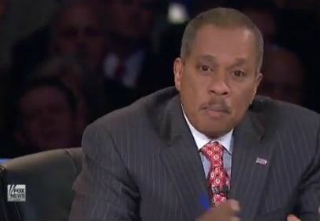 Monday morning, two of RealClearPolitics’ Washington editors debuted their e-book “Election 2012: A Time for Choosing,” which chronicles the Republican primary race. The Daily Caller reports that the e-book reveals that Mitt Romney emailed his adviser who committed the “Etch-a-Sketch” gaffe, telling him not to worry about it; and that Fox News’ Bret Baier cautioned Juan Williams about Newt Gingrich before the Fox News GOP debate in January.

During pre-debate preparations for the Myrtle Beach Fox News debate, Baier and his producers expressed concern that if Williams asked Gingrich a confrontational question about the former congressman’s calling President Obama “the food stamp president,” Gingrich would go after him, “attempting to turn Williams into a prop, as he had done with both Chris Wallace and Baier in a debate in Ames, Iowa.”

According to the book, Williams persisted, saying that “I need to ask it this way because it’s offensive.” The Daily Caller quotes the book:

The meeting adjourned with an agreement to construct a second question to help “redirect” Gingrich if he tried to spin the question back on Williams. Jon Huntsman’s exit from the race the morning of the debate left Baier’s crew scrambling to revise the script and reorder the questions, and they never got around to discussing William’s follow-up.

As you may recall, Williams did end up asking the question. And Gingrich did indeed find a way to turn it around on Williams.

Check out the clip in question below, via Fox News: