Afroman Updates ‘Because I Got High’ to Advocate Marijuana Legalization
VIDEO

Afroman Updates ‘Because I Got High’ to Advocate Marijuana Legalization 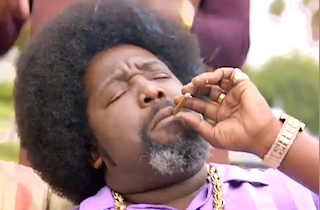 It has been an astonishing 13 years since the rapper known as Afroman had his one-hit wonder with the song “Because I Got High,” in which he listed off all of the productive things he would have done had he not smoked way too much weed. The song was a favorite among the early 2000s stoner crowd — so I hear — but did not exactly frame marijuana in the best light.

Now the recreational pot is legal in two states and on its way to becoming legal in several more, a graying Afroman has teamed up with the organizations Weedmaps, which helps people locate medical marijuana dispensaries, and the National Organization for the Reform of Marijuana Laws (NORML) to put out a new version of the song with more positive lyrics.

“They built a school or two/Because I got high,” Afroman sings in the new video. “Now the state can fund drug treatment/And I know why.” We’ve come a long way from the 2001 lyrics, “I was gonna go to class before I got high. I coulda cheated and I coulda passed but I got high.”

“‘Because I Got High’ put me on the map – it’s what got me a record deal, a Grammy nomination and made me a household name,” Afroman told Rolling Stone about his decision to update the track. “Getting high — and rapping about it — got me to where I am today and I’ll be forever grateful for that. With the current political battle with states trying to legalize weed, I thought it was a good time to educate — or set the record straight — about marijuana’s benefits, which is why I wanted to remake the song.”

And watch the original version below: