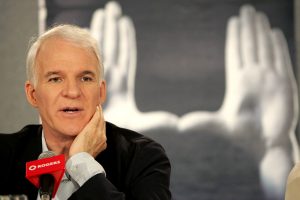 Earlier today, iconic actress Carrie Fisher died, prompting reactions from all around the entertainment industry and beyond. One reaction was from Steve Martin, who reportedly tweeted, “When I was a young man, Carrie Fisher was the most beautiful creature I had ever seen. She turned out to be witty and bright as well.”

We say reportedly because the tweet is gone now. A screengrab lives on here, though:

Fisher spent much of her career fighting against sexist coverage of her work and misogyny in Hollywood, so to be characterized as a “beautiful creature” who just so happened to end up being smart would probably not have sat well with her, at least according to the fans who railed against Martin’s tweet.

As evidenced by the responses that got Martin to delete his tweet, it didn’t sit well with them, either. New York Magazine‘s Claire Landsbaum wrote a scathing rebuke of the tweet for The Cut, which earned her some of her own criticism on the microblogging site.

Wait, this Steve Martin horror is that he dared call her beautiful??

Still, in spite of references to the people who came down on him for the tweet, it is borderline impossible to find one person lambasting him outside of the Cut piece. Tweets about the alleged scolding are abundant, as are tweets lecturing Martin for supposedly kowtowing to liberals.

Most people seem more upset that he deleted it than that he tweeted it in the first place, but the fact remains that the tweet is gone.