After UCSB Shooting, Jeopardy! Champ Asks Fellow Male Nerds: ‘What the F*ck Is Wrong with Us?’ 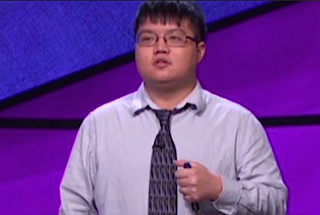 Earlier this year, self-professed “nerd” Arthur Chu won 11 consecutive episodes of Jeopardy! by employing controversial strategies that no one had seen before. Today, Chu threw himself into a much more serious controversy, this time over the role that pop culture plays in horrific incidents like last Friday’s mass killing near the UC Santa Barbara campus in Isla Vista, California.

In a lengthy essay for The Daily Beast, Chu examines how the basic narrative of “nerd culture” conditions men like him and many others to believe that they deserve love and affection from a certain type of beautiful woman. It was this frustration over not being able to “get” girls that 22-year-old Elliot Rodger said drove him to murder strangers, including two young women.

“We (male) nerds grow up force-fed this script,” Chu writes. “Lusting after women ‘out of our league’ was what we did. And those unattainable hot girls would always inevitably reject us because they didn’t understand our intellectual interest in science fiction and comic books and would instead date asshole jocks. This was inevitable, and our only hope was to be unyieldingly persistent until we “earned” a chance with these women by ‘being there’ for them until they saw the error of their ways.”

Chu goes on to cite films like Revenge of the Nerds and Sixteen Candles as a particularly egregious example of this phenomenon in that they ultimately condone a form of “rape” by the nerd characters.

“But the overall problem is one of a culture where instead of seeing women as, you know, people, protagonists of their own stories just like we are of ours, men are taught that women are things to ‘earn,’ to ‘win,'” he continues. “That if we try hard enough and persist long enough, we’ll get the girl in the end. Like life is a video game and women, like money and status, are just part of the reward we get for doing well.”

“What the fuck is wrong with us?” Chu asks his fellow male nerds. “How much longer are we going to be in denial that there’s a thing called ‘rape culture’ and we ought to do something about it?”

Chu’s argument here echoes the one made by Washington Post columnist Ann Hornaday, who laid blame on the films of Judd Apatow, in which “the shlubby arrested adolescent always gets the girl.” Chu even uses Seth Rogen “in every movie Seth Rogen has ever been in” as one example of what nerds everywhere should avoid trying to emulate.

For his part, Rogen told Hornaday he found her article “horribly insulting and misinformed” and asked “how dare you imply that me getting girls in movies caused a lunatic to go on a rampage?”

Rogen has yet to tweet anything about Chu’s essay, but somehow it seems that it may not offend him as much as Hornaday’s did. Instead of lecturing young men about what films like Neighbors are doing to their psyches, Chu uses his piece for self-reflection. And ultimately, he’s not blaming the culture so much as urging the young men who embrace that culture to stop accepting it as reality.