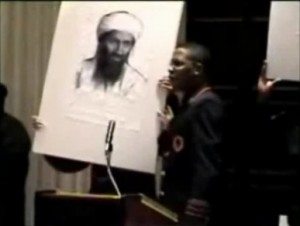 Shortly after my interview with New Black Panther Chairman Malik Zulu Shabazz, during which I confronted him about a number of inflammatory statements by NBPP members, a video surfaced of Shabazz praising Osama bin Laden. I never got the chance, then, to ask him about it, but Alan Colmes remedied that situation on his radio show on Monday. Shabazz tried to re-cast his remarks as cold news analysis, and denied praising bin Laden. It was a stark departure from the honesty he displayed in our interview.

Here’s the clip (the full podcast is available here):

In case you missed it the first time around, here’s the video in question:

As you can see, Shabazz does, indeed, praise bin Laden, saying he deserves “respect,” and calling for a round of applause, as if bin Laden had just delivered a killer stand-up routine. My favorite part, though, is when he says bin Laden “will not die a punk. He will not die like some kind of sissy… Standing up!”

The guy has been hiding in a cave for almost ten years, putting out the occasional audiotape message like some kind of low-tech Sarah Palin Facebook wannabe. There are many qualities you could attribute to Osama bin Laden, but bravery ain’t one of them.

Part of Shabazz’s defense relies on his group’s investment in 9/11 Trutherism, one of a number of controversies that undercut his group’s credibility. Shortly after the attack, the NBPP advanced the theory, made famous by then-New Jersey Poet Laureate Amiri Baraka, that the Jews who worked at the World Trade Center had been warned of the attack.

Like him or not, Malik Zulu Shabazz was remarkably honest when I interviewed him, willing to own his words, and the words of his brethren. He should own this, too.