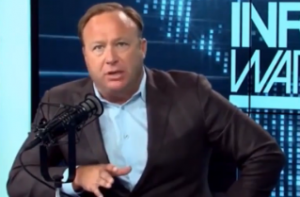 “Everybody’s done it, it’s wrong, it’s evil…” is the dismissive way that Alex Jones started off a segment about slavery and racism yesterday on Info Wars. He had Pastor James David Manning on the show, too, which makes sense since Manning must have plenty of time for press appearances now that his infamous church is being taken away.

The short version of this is that Jones and Manning believe President Barack Obama has a plan to let a bunch of violent criminals of color out of prison because he is hungry for power. I’ve watched this a few times and I’m pretty sure I’m understanding this right, although I don’t really get it. Still, that’s sort of the beauty of conspiracy theories, which is what Jones specializes in. Anyone who doesn’t do the mental gymnastics to get from Assertion A to Assertion B is just falling for the stuff the ever-mysterious “they” are pushing. It’s the same concept with religion: If you don’t believe something, the problem is you, not the source material.

Jones and Manning make a great pair because between conspiracy theories and religious dogma, they cover the whole spectrum of blind faith. Think they can see through agendas and lies, which is why they host their own shows and try to tell people about their theories. Fair enough! One thing they said that seemed promising had to do with Beyoncé herself, which is reasonable considering that to some people, she practically is a religious symbol.

Jones said that the “Viacom, CIA-run weapons system is activating the Beyoncés and all the rest of the folks to say, ‘Go out and kill the pigs.’”

His reference, of course, was to her Black Panther-inspired Super Bowl performance. She has denied that the message had anything to do with killing cops and has maintained that her real message was a plea for cops to stop killing unarmed black people.

Manning seemed on-board with the assessment that violent prisoners are Beyoncés who are seeking to protect Obama’s global power after his term ends, so there you have it, whatever it is.