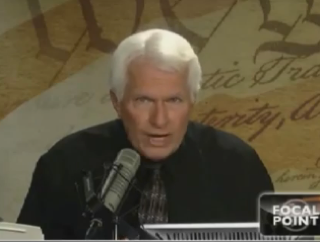 Is there a topical news story that the American Family Association will not somehow weave into its agenda against LGBT people? Spokesman Bryan Fischer‘s column this weekend equating homosexual behavior to that guy who ate the face off a homeless man puts up a good arguments for the answer to that question being a flat “no.”

RELATED: Sign Of The Zombie Apocalypse? Naked Man Shot While Eating Someone’s Face Off In Miami

The article, titled “It’s Altogether Right to Discriminate Against Homosexual Behavior,” explains that discrimination is acceptable for many other behaviors, including eating a person’s face off. Since the government can discriminate against people who drunk drive or kill people, homosexuality should fall under the umbrella of acceptable things to discriminate against, too:

This is what public policy is all about: using good judgment to distinguish those behaviors that are worthy of public approval from those behaviors which ought to receive public disapproval.

Public policy is about discriminating against behaviors that are socially destructive and corrosive to the social fabric. So, we rightly discriminate against people who rip off convenience stores, burgle houses, drive while drunk, eat the faces off homeless people, gun down servicemen on military bases, embezzle funds from employers or clients, or beat their wives.

This discrimination is based, you will note, on behavior. Public policy is not a concern until an individual acts. As Thomas Jefferson said, “[T]he legitimate powers of government reach actions only, & not opinions.”

Fischer does helpfully clarify in his column that he does not discriminate against anyone for the way they are born, but only for actual homosexual behavior: “We don’t punish people for what they think about doing, or even for what they want to do, but only for their actions, only for the times when they yield to socially destructive impulses.” The article came out around the same time as a broadcast in which he explained that it was reasonable “for a rational culture to discriminate against homosexual behavior” and argued that he merely agreed with Congress and the superior courts that upheld the Defense of Marriage Act, which “discriminates against couples whose relationship is based on sodomy.”