Former Pitcher John Rocker Returns To Punditry: ‘I Would Vote For The Devil Himself Over Barack Obama’ 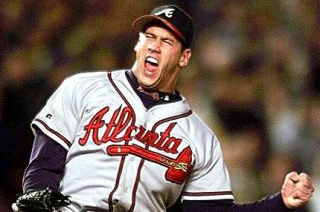 Former major league pitcher John Rocker, long retired and out of the spotlight, has returned to political punditry, telling World Net Daily that “this country cannot sustain four more years of [President Obama’s] cancerous ideology” and that “I would vote for the devil himself over Barack Obama.”

In a WND profile on Rocker and his new book, “Rocker: Scars and Strikes,” the controversial closer said:

Like hopefully a majority of Americans out there, I’ll be voting against President Obama this year. I won’t necessarily be voting for the Republican candidate as much as I will be voting against Obama. … This country cannot sustain four more years of his cancerous ideology. … It seems that Governor Romney will be getting my vote, although be it somewhat by default. I would vote for the devil himself over Barack Obama which would actually be tough though as he seems to already be a supporter.

The reason his Romney support is “by default” is because he was a fan of one of the Republican primary losers:

I have always been a big fan of Newt Gingrich. He is one of the most brilliant people I have ever listened to. Unfortunately things didn’t work out for him, but such is our democratic process and a large reason America is the great nation it is.

As you may recall, Rocker generated serious controversy in 1999 when he told Sports Illustrated:

[New York] is the most hectic, nerve-racking city. Imagine having to take the [Number] 7 train to the ballpark, looking like you’re [riding through] Beirut next to some kid with purple hair next to some queer with AIDS right next to some dude who just got out of jail for the fourth time right next to some 20-year-old mom with four kids. It’s depressing. … The biggest thing I don’t like about New York are the foreigners. I’m not a very big fan of foreigners. You can walk an entire block in Times Square and not hear anybody speaking English. Asians and Koreans and Vietnamese and Indians and Russians and Spanish people and everything up there. How the hell did they get in this country?