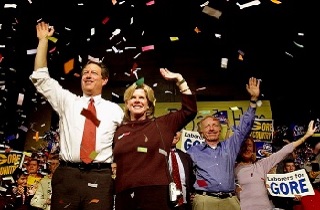 Depending on whom you ask, of course, it’s many trillions of dollars, but why quibble? In an interview with The Chicago Tribune, retired Supreme Court Justice Sandra Day O’Connor questioned the Court’s decision to award George W. Bush the presidency, a decision in which Justice O’Connor cast the deciding vote. Liberal website ThinkProgress characterized O’Connor’s words as “regret,” but that’s not necessarily the case. Justice O’Connor does seem to allow that the Bush v. Gore decision was wrong, but doesn’t give any indication that she regrets the results of it. Maybe she just prefers not to think about it.

From The Chicago Tribune‘s Dahleen Glanton:

Looking back, O’Connor said, she isn’t sure the high court should have taken the case.

“It took the case and decided it at a time when it was still a big election issue,” O’Connor said during a talk Friday with the Tribune editorial board. “Maybe the court should have said, ‘We’re not going to take it, goodbye.'”

The case, she said, “stirred up the public” and “gave the court a less-than-perfect reputation.”

“Obviously the court did reach a decision and thought it had to reach a decision,” she said. “It turned out the election authorities in Florida hadn’t done a real good job there and kind of messed it up. And probably the Supreme Court added to the problem at the end of the day.”

…O’Connor, 83, said that while other members of the court never personally lobbied for her vote, they did try to persuade her by including points in their written arguments that they believed she would support. Sometimes, she said, they were successful.

In other news, a spokesperson for Pontius Pilate tells Mediaite that the former Prefect is “kinda iffy, now, about that whole ‘letting Barabbas go instead of Jesus‘ thing. Turns out Mr. Christ was a pretty good guy.” (He added that Mr. Pilate is concentrating most of his energy on promoting his exercise plan.)

It’s tough to imagine what a Sliders episode in which Al Gore won the presidency would look like, but that hasn’t stopped some people from trying. According to NBC News’ Michael Isikoff‘s imagination, President Gore would have ordered the F.B.I. to heed that infamous August 6 PDB, but it would have made no difference. President Gore would have kept us out of the Iraq War, but would have been impeached. It was a bit of hippie-punching fiction that fit right in with the mainstream media’s ongoing effort to make Americans okay with their own validation of the “get over it” narrative. Who knows, maybe things wouldn’t have been that much better under President Gore, but is it really possible they’d have been worse?

Let’s pretend that President Gore couldn’t have prevented the terrorist attacks of 9/11, even if, as Isikoff imagines, he set the F.B.I. to the task a month earlier. It’s not likely he would have invaded Iraq, and he probably would have devoted more resources to Afghanistan when it really mattered, and would probably have nailed Osama bin Laden at Tora Bora, but what’s a few trillion dollars and thousands of lives, in the sweep of history?

Ironically, though, with no Iraq War to oppose, Sen. Barack Obama might have had a hard time eking out a primary victory against Sen. Hillary Clinton, who would have had an incumbent president campaigning for her, as well. Sandra Day O’Connor may have given us President Bush, but she also appears to have given us President Obama. Right now, we might very well have been months into the second term of a Clinton/Obama administration, looking forward to a historic 2016. Without the myth that gun control cost Gore the 2000 election, the assault weapons ban might have been strengthened, not allowed to expire, and perhaps Gore could have enacted the other gun regulations that he promised:

But look on the bright side, America: Justice O’Connor did give us this spiffy new liberry.