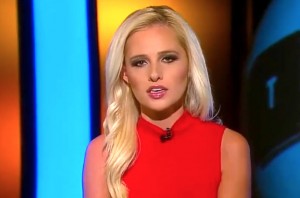 An anchor on Glenn Beck‘s video version of The Blaze is upset over Beyoncé‘s half-time show at Sunday’s Super Bowl. Today, across the Internet, people are finding it shocking to watch a white woman so confidently tear into the performance for being “unfair” to white people while also insisting that Beyoncé and her fellow black entertainers are the reason America “can’t heal” from racism she doesn’t think is a problem anymore.

Tomi Lahren‘s points seem to be that racism isn’t a big deal anymore since professional football is “a game where black fans cheer next to white fans,” and, “white people like [Beyoncé’s] music too, white people buy [her] songs on iTunes, memorize [her] lyrics and admire [her] talent and beauty.” Her grievance seems to be that white people watching the performance couldn’t be entertained by Beyoncé embracing her heritage. (I would like to point out that Coldplay was also there, so the argument that Roger Goodell and Co. weren’t looking out for white people holds very little water.)

Certainly, this rant was meant to generate headlines and attention. She’s tweeted about it about 16 times, even hashtagging some of her tweets #TeamTomi as if she is actually trying to position herself as being involved in an active feud with Beyoncé. If Beyoncé ever responded to her dramatics, Lahren’s career would be toast, which she knows. She’s counting on her fans’ perception that she took the millionaire and Grammy winner down a notch and the entire histrionic display, which came a week after she launched her own show on the channel, should be viewed with all of that in mind.

It might have been more realistic for Lahren to level her attack at someone like Jessica Williams, but the assumption here is that she didn’t want to go after anyone who might actually fight back.

Over at HipHollywood, someone is fighting back. Eric D. Berry wrote a piece that calls her diatribe “lunacy.” He writes:

According to Tomi, the “Formation” artist is a contemporary Benedict Arnold for using her halftime performance to push a “Black lives MATTER MORE” agenda instead of shucking and jiving for White people. What Tomi gets, but will not admit because she’s a paid GOP troll, is that the #BLM message has always been “Black lives matter”. Not more. Just matter. The protests, the marches, they’ve never been orchestrated to proclaim that Blacks as an ethnic group are MORE valuable than any other, but that they’re just as valuable as any other.

His statements on Black Lives Matter do dovetail with the group’s description of their activities and goals. However, there was a  part of Lahren’s speech that stuck out, but hasn’t received much blowback. It is this:

What is the political message here? What is they are trying to convey here? A salute to what? A group that used violence and intimidation to advance not racial equality, but an overthrow of white domination?

She actually admitted that the Black Panther Party, which Beyoncé’s dancers were dressed similarly to in honor of the 50th anniversary of the group’s founding, was created because of “white domination.” There are arguments to be had about their tactics, as even Martin Luther King, Jr., and Malcolm X disagreed about the role of violence in the movement, but that is not the point at this moment. The point is that she acknowledged that the group was created to end white supremacy in the United States, which is apparently not something that should be commemorated when there are “little white girls” who might not like it.

And now, she would like Beyoncé to stop talking and continue dancing for her entertainment.