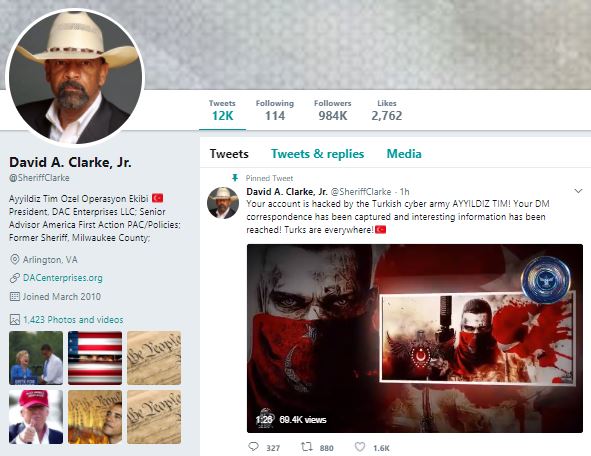 While Carter’s page is back to normal now, a screengrab shows her bio was changed to reflect a nationalist statement by the Turkish hackers:

As for Clarke, his account appears normal now too, but earlier this afternoon, his page still reflected the statements posted by the hackers, including his pinned tweet, which read, “Your account is hacked by the Turkish cyber army AYYILDIZ TIM! Your DM correspondence has been captured and interesting information has been reached! Turks are everywhere!”

Your account is hacked by the Turkish cyber army AYYILDIZ TIM! Your DM correspondence has been captured and interesting information has been reached! Turks are everywhere!?? pic.twitter.com/CFqTCVG2Ym

The hackers’ tweet included a video that shows Turkish nationalistic messaging. While that was the only tweet posted by the group onto Clarke’s page, his cover photo was also switched to a pro-Turkish photo and his bio was changed to include the country’s flag.

Ex-Fox News hosts Eric Bolling and Greta Van Susteren were previous victims of the hackers, which was particularly noteworthy as the media figures are two of the only 45 people that are followed by President Donald Trump and can therefore correspond with him via direct messages.

Bolling was the most negatively targeted by the group, as his private messages were posted publicly — which included his cell phone number and personal email address.

“You are hacked by the Turkish cyber army Ayyıldız Tim! We got your DM correspondence! We will show you the power of the Turk!” Stated one tweet posted by the hackers.

Everyone previously hacked by the group has since regained control of their accounts with no lasting damage done — except for the brief loss of their Twitter Verified status.