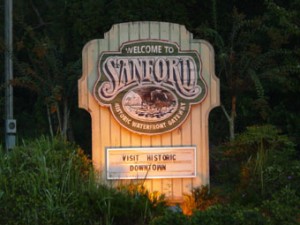 Time for another installment of Radical Fringe Group Weighs In On Serious Issue! We’ve heard from the Black Panthers on this whole Trayvon Martin case, but what do the Neo-Nazis have to say? Well, apparently they are very concerned that violence could break out, and they are ready to fight back. Yes, the Miami New Times is reporting that a legion (well, technically more of a carpool group) of Neo-Nazis patrolling Sanford, Florida, saying they’re not necessarily advocating violence, but they just want to be ready when it breaks out.

A group of roughly 10 to 20 people, including a few volunteers from Miami, are marching around Sanford with firearms, which is “totally within the law.” Commander Jeff Schoep explained that they are “not the type of white people who are going to be walked all over.” They’re patrolling the area because of concerns over the local white population in Sanford that a race riot could break out at any time. Schoep insists they are only there for protection, and compared their actions to that of another in reacting to this case, while distinguishing itself from the Black Panthers.

“Whenever there is one of these racially charged events, Al Sharpton goes wherever blacks need him,” Schoep said. “We do similar things. We are a white civil rights organization.”

He went to great lengths to contrast his organization with the New Black Panther Party, who he blamed for scaring local whites and spurring the need for NSM patrols. Schoep admits that the NSM and the Black Panthers are actually alike in that they are both racial separatists. But he sees a double-standard in the government’s treatment of the two groups.

“The Black Panthers have been offering bounties and all that,” he says. “But if we called for a bounty on someone’s head, I guarantee we’d be locked up as quick as I could walk out of my house.”

And just so we’re clear, the Neo-Nazis have no official position on the Martin case, because remember, George Zimmerman isn’t even white. But the Neo-Nazi commander is trying to assure everyone that they are trying to protect everyone, because “if something were to touch off a race riot, we’d already be in the area.”

Well said! Because whenever there’s a race riot, my first question is always, “Where are the armed racists when you need them? They’ll put a stop to all this violence!”

Update: According to the blog Legal Insurrection, the Sanford Police Department deny the report that the there actually any neo-Nazis roaming the streets.