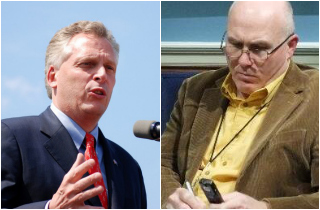 Two weeks ago, Lewis broke the story that McAuliffe had been named in a report as having lied during a federal investigation, which appeared initially to be another sordid tale in Virginia’s queasy election cycle. However, the man cited in court documents under the initials “TM” was quickly determined not to be McAuliffe. The AP retracted the story within two hours, and Lewis apologized on Twitter.

According to the Huffington Post’s Michael Calderone, the Associated Press fired a third employee on Tuesday, though it had not released the name. (UPDATE 11:48 p.m.: The third employee let go was Norman Gomlak, AP’s South Desk Editor, who was involved in editing the piece.)

RELATED: None of the Above: VA Paper Refuses to Endorse Candidate for Governor

Lewis’ release was especially notable, given his tenure in Virginia media and politics. Governor Bob McDonnell and Lieutenant Governor Bill Bolling, both Republicans, and Senator Tim Kaine, a Democrat, praised Lewis and criticized his firing:

“The firings have alarmed AP employees nationwide, and the News Media Guild will vigorously enforce the contractual rights of the employees it represents,” News Media Guild President Martha Waggoner told Calderone. (UPDATE 11:48 p.m.: NMG has filed a grievance to get Lewis’ job back.)