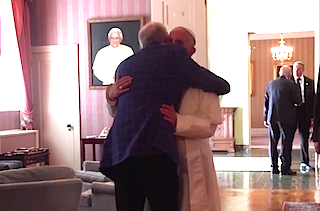 Much was made this week over Pope Francis’ apparent private meeting with anti-gay marriage activist Kim Davis. In fact, Mike Huckabee called it a turning point in the fight against “judicial tyranny.” But now we have learned that the pope also met with a gay couple in Washington, D.C. one day earlier.

The day before Pope Francis met anti-gay county clerk Kim Davis in Washington last week, he held a private meeting with a longtime friend from Argentina who has been in a same-sex relationship for 19 years.

Yayo Grassi, an openly gay man, brought his partner, Iwan, as well several other friends to the Vatican Embassy on September 23 for a brief visit with the Pope. A video of the meeting shows Grassi and Francis greeting each other with a warm hug.

“Three weeks before the trip, he called me on the phone and said he would love to give me a hug,” Yayo Grassi told CNN. “He has never been judgmental,” he added. “He has never said anything negative.”

On Friday, the Vatican clarified that Pope Francis’ meeting with Davis “should not be considered a form of support of her position in all of its particular and complex aspects.” The statement added, “The only real audience granted by the Pope at the Nunciature was with one of his former students and his family.”

That student was Grassi, as the CNN report and a new statement from the Vatican confirmed this afternoon:

Watch video of the meeting below: