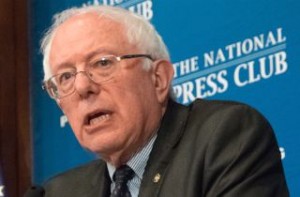 Bernie Sanders has finally received an endorsement from one of his own Senate colleagues, after others have lined up behind Hillary Clinton.

Senator Jeff Merkley, a progressive Democrat from Oregon, wrote an op-ed for the New York Times announcing that he is endorsing Sanders.

Why? Merkley writes about how America has gotten “off the track” and how many Americans are “working longer for less income than decades ago.” But lest you think that as a critique of the current Democratic president…

Under President Obama’s leadership, our country is fairer and more prosperous for all than it was seven years ago. But as we look toward the next administration, there is far more work to do. We need urgency. We need big ideas. We need to rethink the status quo.

Merkley praises Clinton and says she would be a “strong and capable president,” but he thinks Sanders is the better choice.

He touts Sanders’ record on trade, global warming, and the economy before making this grand pitch:

It has been noted that Bernie has an uphill battle ahead of him to win the Democratic nomination. But his leadership on these issues and his willingness to fearlessly stand up to the powers that be have galvanized a grass-roots movement. People know that we don’t just need better policies, we need a wholesale rethinking of how our economy and our politics work, and for whom they work.

Clinton has so far been endorsed by roughly 40 Senate Democrats, including Oregon’s other senator Ron Wyden.