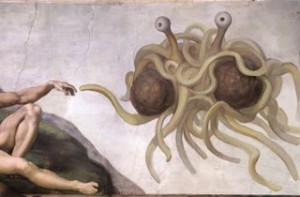 A federal judge in Nebraska has ruled that the Church of the Flying Spaghetti Monster (FSMism) is not a real religion, delivering a setback to practicing Pastafarians around the country.

The Court finds that FSMism is not a “religion” within the meaning of the relevant federal statutes and constitutional jurisprudence. It is, rather, a parody, intended to advance an argument about science, the evolution of life, and the place of religion in public education.

Rather than dismiss FSMism out of hand, Gerrard writes that “FSMism contains a serious argument,” and his order goes into some detail on the background of the Church’s founding in 2005 as a “riposte to intelligent design.” In the Church’s manifesto, The Gospel of the Flying Spaghetti Monster, founder Bobby Henderson argued that if school boards wanted to peddle creationism (with the gild of “intelligent design”) in classrooms under the banner of “balance,” then it made sense to give equal consideration to the dogma that a Flying Spaghetti Monster created the heavens and the earth as well. Gerrard quotes large tracts of the Gospel in his decision.

While Gerrard seems to find satirical value in FSMism, he balked at the argument of plaintiff Stephen Cavanaugh, currently a prisoner in the Nebraska State Penitentiary, that prison officials should “afford his ‘faith’ the same rights and privileges as religious groups, including ‘the ability to order and wear religious clothing and pendants, the right to meet for weekly worship services and classes and the right to receive communion.'” (A footnote in the decision wryly notes that “Although Cavanaugh does not explain this in detail, it is clear from the FSM Gospel that “religious clothing” means a pirate costume and “communion” is, not surprisingly, “a large portion of spaghetti and meatballs.”)

In previous court battles over the question of whether FSMism was a real religion, plaintiffs won the right to wear colanders on their head (“religious headdress”) in DMV photos in Texas, Massachusetts, and Wisconsin. (New Jersey decided to be intolerant.)