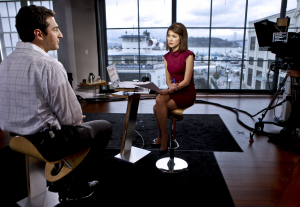 Who knew? There’s apparently no rule requiring network newscasts be based in New York. Take, for instance, Bloomberg TV’s recently-launched Bloomberg West, a nightly show covering technology and the tech companies–Apple, Google, Facebook–that have transformed our lives. With each of those companies based in Silicon Valley, Bloomberg West headed, well, west. “We’re the only network news show based in San Francisco,” said Emily Chang, co-host of Bloomberg West and a former Beijing-based correspondent for CNN.

As Chang told Mediaite, Bloomberg West is all about not following the rules of doing an East Coast newscast. It’s different from the competition at business networks, and with its West Coast vibe, it’s even a shift from shows on Bloomberg TV. “If you watch Bloomberg and Bloomberg West comes on, it’ll be like you changed the channel. We’re different in a great way.”

Like the companies she covers, Chang says her nightly show, with co-host Cory Johnson (a former hedge fund trader and CNBC correspondent), aims to adopt the style and priorities of Silicon Valley. “More relaxed, more engaged in the culture of Silicon Valley, which is very unique and very not New York.”

Chang and Johnson report from a waterside bureau and studio that’s home to 65 reporters and editors. With its industrial design, tech startup furniture and bridge views, it looks a lot like the headquarters of Facebook or Twitter, and little like the studios of CNBC or Fox Business. “The whole world does not revolve around an East Coast perspective,” Jeff Taylor, Bloomberg’s West Coast TV managing editor and San Francisco bureau chief told The San Francisco Chronicle. “Increasingly, the trends in our lives are getting driven in some meaningful way by the technology developed here on the West Coast.”

The show’s focus on tech and tech companies does not mean poring over Apple’s most recent earnings statement. “It’s not a show about Wall Street or stocks or earning reports,” Chang told Mediaite. “It’s about tech companies and the leaders of these companies. The idea is to look at the landscape and see how tech is going to change our lives tomorrow, a year from now or five years from now.”

And already, they’re getting noticed. Chang says someone at a Silicon Valley company recently offered noteworthy praise. “They said ‘I learn so much’ from your show. And that’s a big compliment.”