Donald Trump Announces That He Is NOT Running For President 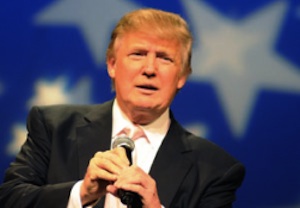 Donald Trump announced today that after weeks of flirting with plans to run for President of the United States, that he is NOT going to run for highest office. The announcement came on the day that NBC announced its Fall TV lineup at its annual Upfronts. Watch the report on Fox News from just moments ago after the jump.

Trump, who met with NBC executives Monday morning to make his plans clear, faced a deadline from the network over the future of the hit NBC show The Apprentice. The network is unveiling its fall lineup to advertisers today, and needed clarification from Trump over his intentions. NBC executives had said they would proceed with the hit reality show whether or not Trump stepped aside to make a White House bid, but Fox News reports Trump’s special counsel Michael Cohen says NBC can’t simply re-cast Trump’s role “because the network doesn’t own the show. He says Trump and the reality show’s creator, Mark Burnett, own it.”

Polling has suggested that a Trump presidential campaign–as entertaining as that might be–would not be a lock with voters. CNN reported Monday ahead of Trump’s announcement:

Donald Trump is getting more bad news as he comes closer to making a final decision about a presidential run.

A new survey from Politico and George Washington University indicates more than two-thirds of Americans think the business mogul has “no chance” of ever winning the White House.

The poll, out Monday, shows 71 percent think a Trump candidacy is a non-starter while only 26 percent think there is a chance the reality television star could beat President Obama.

Well, polls be damned. Turns out that Donald Trump will not be running for president anyway. Watch the video of the announcement below, courtesy of Fox News (followed by the text of Trump’s statement):

Below is the full text of Trump’s announcement (via):

After considerable deliberation and reflection, I have decided not to pursue the office of the Presidency. This decision does not come easily or without regret; especially when my potential candidacy continues to be validated by ranking at the top of the Republican contenders in polls across the country. I maintain the strong conviction that if I were to run, I would be able to win the primary and ultimately, the general election. I have spent the past several months unofficially campaigning and recognize that running for public office cannot be done half heartedly. Ultimately, however, business is my greatest passion and I am not ready to leave the private sector.

I want to personally thank the millions of Americans who have joined the various Trump grassroots movements and written me letters and e-mails encouraging me to run. My gratitude for your faith and trust in me could never be expressed properly in words. So, I make you this promise: that I will continue to voice my opinions loudly and help to shape our politician’s thoughts. My ability to bring important economic and foreign policy issues to the forefront of the national dialogue is perhaps my greatest asset and one of the most valuable services I can provide to this country. I will continue to push our President and the country’s policy makers to address the dire challenges arising from our unsustainable debt structure and increasing lack of global competitiveness. Issues, including getting tough on China and other countries that are methodically and systematically taking advantage of the United States, were seldom mentioned before I brought them to the forefront of the country’s conversation. They are now being debated vigorously. I will also continue to push for job creation, an initiative that should be this country’s top priority and something that I know a lot about. I will not shy away from expressing the opinions that so many of you share yet don’t have a medium through which to articulate.

I look forward to supporting the candidate who is the most qualified to help us tackle our country’s most important issues and am hopeful that, when this person emerges, he or she will have the courage to take on the challenges of the Office and be the agent of change that this country so desperately needs.

Thank you and God Bless America!