Breaking: Newspapers Are In Trouble

Breaking: Newspapers Are In Trouble 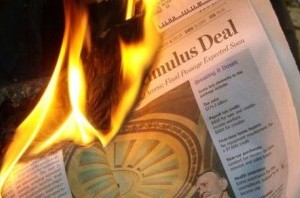 Over at The Awl, Choire Sicha has been doing a crackerjack, data-intensive job of sifting through one of the biggest, least sexy stories of our time: newspapers as we know them are going away. Yesterday, he put together this acclaimed chart of the circulations of six big papers over the past two decades.

The takeaway: the Wall Street Journal is bigger than everybody else (but cheats a little by including paid online subscribers in their circ figures); the LA Times seems determined to drive itself into the ground, and the NYT and WashPo aren’t looking too good themselves.

Today, Sicha covers newspapers’ coverage of their own decline:

So first, I wanted to look into the actual provision of numbers to the reader within reported stories because I got a sense at times that information was being obscured from the reader—as part of what I (anecdotally) see as a general trend of putting less “facty” information in newspapers. The amount of actual numbers given—as in “The Los Angeles Times, owned by Tribune, reported daily circulation fell 6.5 percent, to 907,997″—per article is then averaged for each year and in five-year increments.

[click through here to see The Awl’s fancy-looking graph, not pictured here]

So! What we see is that there is radically less actual information about the real amount of newspapers sold in the last six years—the time of the real newspaper circulation crisis—than in the two previous five-year increments.

The trouble with “factiness,” aside from the temptation it poses Stephen Colbert’s lawyers to file an infringement suit, is that on the whole, people would prefer their “LOLcats” and their “SEO-friendly charticles” and their “Hamster Dance” and what not — or at least that’s emerged as the conventional wisdom.