President Obama: Gaddafi Has ‘Lost Legitimacy’ And Must ‘Leave Now’ 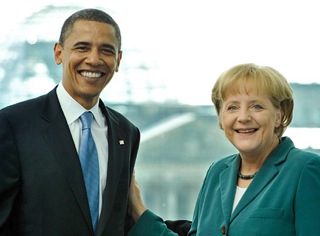 After little more than a week of carefully choosing words and making deliberately uncontroversial statements on the situation in Libya, President Barack Obama has told German Chancellor Angela Merkel that Libyan leader Muammar Gaddafi had “lost legitimacy” by attacking his people and should remedy his wrongs by “leaving now.”

According to Fox News, the statements came in a call with Chancellor Merkel, and publicly released in a statement by the White House:

In a White House statement on Obama’s telephone call with German Chancellor Angela Merkel, Obama took his most direct position yet on the escalating violence in Libya.

“The president stated that when a leader’s only means of staying in power is to use mass violence against his own people, he has lost the legitimacy to rule and needs to do what is right for his country by leaving now,” it said.

This is by far the most unequivocal stance the President has taken on Libya so far, previously making very measured comments on the revolt there and not yet mentioning Gaddafi. No word yet on whether President Obama will make a public statement in the same vein.

Update: Via Politico, here is the full White House statement on the conversation:

The President spoke today with Chancellor Angela Merkel of Germany, as he has done with many of his international counterparts this week, to discuss the situation in Libya and coordinate our urgent efforts to respond to developments and ensure appropriate accountability. The President and the Chancellor shared deep concerns about the Libyan government’s continued violation of human rights and brutalization of its people. The President stated that when a leader’s only means of staying in power is to use mass violence against his own people, he has lost the legitimacy to rule and needs to do what is right for his country by leaving now. The leaders reaffirmed their support for the Libyan people’s demand for universal rights and a government that is responsive to their aspirations, and agreed that Qadhafi’s government must be held accountable. They discussed appropriate and effective ways for the international community to respond. The President welcomed ongoing efforts by our allies and partners, including at the United Nations and by the European Union, to develop and implement strong measures. The President and the Chancellor also discussed the global economic recovery and the need for effective tools to promote economic stability in the Eurozone.