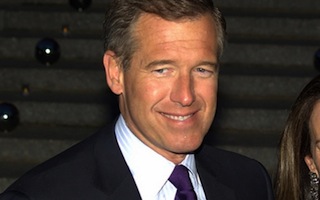 Earlier today, Gawker broke the news that Brian Williams thought Lana Del Rey had “one of the worst outings in SNL history” (not a huge news story but what do you expect on a national holiday?). How did they get this quote? Well, it turns out it was from a private email Williams sent to Gawker head honcho Nick Denton. Gawker posted Williams’ Del Rey critique along with some choice quotes about how often he checks the site’s “shit” on his iPad. Unsurprisingly, NBC PR wasn’t thrilled to see the message hit the front page.

I hope you’re well. Happy New Year. A big congratulations to the new freelance weekend guy, Taylor Bernam. He’s done some good posts right out of the box. I do wish the main page featured more TV coverage (Brooklyn hippster [sic] Lana Del Rey had one of the worst outings in SNL history last night — booked on the strength of her TWO SONG web EP, the least-experienced musical guest in the show’s history, for starters). In my humble opinion as a loyal customer (you know I love you but the Blog View button will be the eventual cause of my death) and while I know you’re in the midst of an editor change, weekends have been allowed to go awfully fallow — and it was a fallow holiday period for those of us who check your shit 10 times a day by iphone. I know you’ve been watching NBC Nightly News religiously each evening and I’ll no doubt be getting a withering, detailed critique from you straight away.

Oh, also that whole dissing a performer on an NBC show and cheekily talking up your love of a divisive gossip blog isn’t a great thing either. Yeah, network PR people don’t love that. So, one from NBC sent Gawker an email to remove the letter. The site decided to just promptly publish that letter too.

“Kevin — can you please have the post of Brian Williams’ email to Nick Denton taken down immediately? That was sent in confidence as friends and absolutely never intended to be public. A speedy removal would go a long way in maintaining the trust and respect we have for your site.”

I’m going to take a wild guess that the “trust and respect” levels may have dropped a bit today.

Anyway, there’s one big problem with this story and I’m just gonna come out and say it;

Come on, Brian. If you hated Lana Del Rey so much, you could have just checked out our site, duh.

Not that I’m jealous or anything. I get emails from famous TV people telling me how often they check my shit all the time. Like daily. In fact, I probably got like four in the past hour. And from bigger people than Brian Williams too! I totally do! No fooling! So, no, I’m not jealous because that happens to me all the time. I just…don’t post about it because…I have better ethics than Gawker.