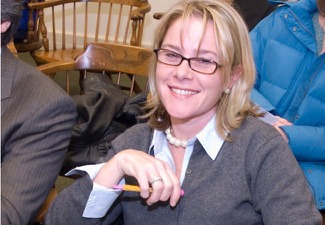 Bridget Kelly, the Chris Christie aide directly implicated in the BridgeGate scandal, sent out a statement today slamming the credibility of the report released this week and slamming the “editorialized comments” of the man leading the investigation.

In particular, Kelly’s statement takes serious issue with several references to her relationship to another Christie ally in the report. Rachel Maddow called out those parts of the report as “slut-shaming” last night, and Kelly’s statement calls them out for blatant sexism.

“The report’s venomous, gratuitous, and inappropriate sexist remarks concerning Ms. Kelly have no place in what is alleged to be a professional and independent report.”

Kelly believes the report was meant to tarnish her credibility and cites a current investigation in the U.S. Attorney’s office as the “only credible investigation” into the matter.

You can read Kelly’s full statement below:

Having reviewed the report of Gibson, Dunn & Crutcher, LLP, as well as listened to the comments of Randy Mastro, Esq., we note that by Mr. Mastro’s own admission, he did not have access to all information. Of course, without reviewing all pertinent evidence, any conclusions that are to be drawn are by definition incomplete. The report’s venomous, gratuitous, and inappropriate sexist remarks concerning Ms. Kelly have no place in what is alleged to be a professional and independent report.

There appear to be two distinct versions of the George Washington Bridge lane closings. On the one hand, Mr. Wildstein, through his counsel, has taken one clear position. On the other hand, Mr. Mastro has staked a different view. Thus, Ms. Kelly’s evidence could be critical to verifying either of the two competing versions of events. A preemptive strike to isolate Ms. Kelly and impugn her credibility is not surprising. Despite Mr. Mastro’s editorialized comments to the contrary, Ms. Kelly is not a liar. She is a single mother of four children who was deeply devoted and committed to her job at the Office of the Governor. She worked tirelessly to pursue the goals of the Office during her tenure.

The only credible investigation into the lane closings is being conducted by the U.S. Attorney’s Office. If Ms. Kelly were provided with the appropriate procedural safeguards, she will be fully cooperative and provide truthful and complete answers to any questions asked of her by the appropriate law enforcement authorities.