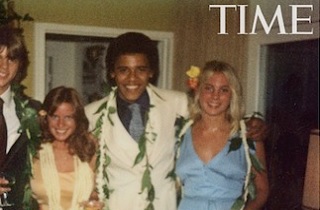 Earlier today, Mediaite brought you Time magazine’s exclusive photo of an adorkable 1979 prom foursome that included a 17 year-old Barack Obama. The photo was provided by Kelli Allman, prom date of the young future POTUS’ best friend, Greg Orme. Along with the prom photo, Allman gave Time a shot of the yearbook page that Obama inscribed, which raised this observer’s eyebrows, slightly, by suggesting “I hope we can keep in touch this summer, even though Greg will be gone.”

I didn’t really look at the picture that closely, though, and only read the quote from the Mediaite post. Upon closer examination, it looks like maybe young Barack was dropping a hook in the water.

As a formerly-17 year-old guy (in 1985, to be fair), it already strains credibility that while Greg was away, his pal only wanted to play, like, Scrabble over lunch. But maybe he was just a good guy with a short list of dining companions. Wonkette‘s Rebecca Schoenkopf helpfully transcribed Barack Obama’s yearbook message to Kelli Allman, complete with totally NSFW footnotes:

Kelli,
It has been so nice getting to know you this year. You are extremely sweet and foxy1, I don’t know why Greg would want to spend any time with me at all2! You really deserve better than clowns like us; you even laugh at my jokes3!I hope we can keep in touch with each other this summer, even though Greg will be gone. Call me and I’ll buy you lunch sometimes4.

Anyway, good luck in everything you do, and stay happy.

1 “Foxy” is a good word for letting a girl know you would be amenable to a bone. Like, when you are talking to California’s Attorney General and you are all “hey foxy, what is up,” and then she is like…

You should go there and read the rest of them, because they’re funny. Still, as someone who genuinely likes and respects the President, I had a hard time agreeing that he was trying to creep on his best friend’s girl. But what Time magazine, Mediaite, and Wonkette all failed to point out was this: 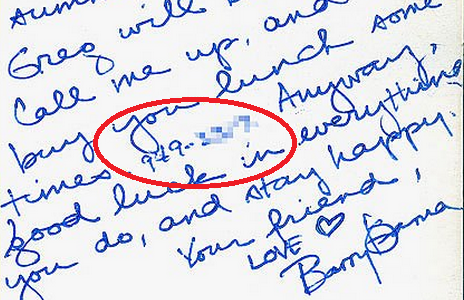 Yes, the telltale digits. Sure, an ambiguous wish to maybe keep in touch, have lunch, could be completely innocent, but the phone number in the yearbook is a purpose pitch. As much as I hate to admit it, it appears there was macking being performed. Since Allman had nothing juicy to tell Time, it looks like maybe they never closed the deal, but one way or another, he did provide her with access to contraception, so maybe he’s not such a bad guy.