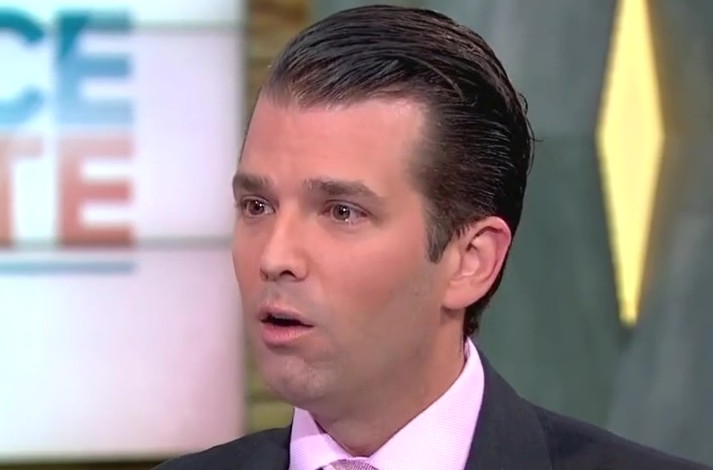 Media Twitter was cranked up to 11 after the news dropped that Donald Trump Jr. met with a Kremlin-affiliated lawyer because he was told the Russian government wanted to offer him dirt on Hillary Clinton.

Trump Jr. has taken heat in recent days due to his changing stories about the meeting, and also because President Trump‘s son set it up after being told it could help his father damage his opponent. Tonight’s report from the New York Times states Trump Jr. received an email about how the information he would allegedly receive came from the Russian government as part of their efforts to help his dad.

This being the case, media observers are viewing this as a major development for the ongoing investigations into Russia’s interference with the 2016 election:

There's no spinning this: pic.twitter.com/HyHqGybl5g

When #BreakingNews breaks and you just can't even anymore… pic.twitter.com/liaIMxsnw4

Out: But her emails
In: But his emails

The Trump Team's "We're stupid and never ran a campaign before" defense falls apart because campaign vet Paul Manafort was in the meeting.

I'm holding off on the four-alarm fire treatment because there are still many unanswered Q's. But 'nothingburger' spin just died. 4/

Tiffany would have at least deleted the email

Will Republicans NOW go on TV saying they would take the meeting if they knew it was part of Russian attempt to collude to elect Trump? https://t.co/UDy3S4bySI

In light of NYT's latest, remember:

If this NYT reported Donald Jr. email is real, dude. Not good. pic.twitter.com/6s86QrheHW

Just when you think story couldn't get more explosive; they literally have an email saying "Russia wants to elect your dad. Can we meet?"

i can't decide if i'm more blown away by the actual substance or by don jr's world-class stupidity.

A lot of people were especially surprised to see Matt Drudge‘s reaction to the story: