By the Way, Trump’s Super Bowl Interview Was Way Worse Than Even Advertised
Opinion

By the Way, Trump’s Super Bowl Interview Was Way Worse Than Even Advertised 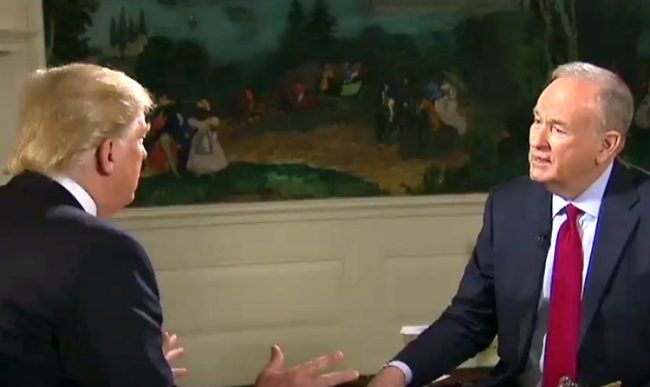 I have written several times here about how one of the more dangerous elements of the Trump presidency (and possibly something which will work dramatically in his favor) is that his constant outrageousness will desensitize us to the utter insanity of it all. What would normally be massive week-long controversies are suddenly immediately forgotten as if they never happened.

President Trump’s “Super Bowl” interview with Fox’s Bill O’Reilly is a perfect example of this phenomenon.

When Fox News first leaked a small portion of Trump’s interview regarding his “respect” for Russian leader Vladimir Putin, there was indeed some outrage. This was mostly because the President downplayed the fact that Putin is a “killer” and asserted that our country is not so “innocent” (twice) and seemingly just as bad as Russia.

However,  the mostly state-run (formerly “conservative”) media outlets were extremely muted in their reaction, in part because there was some hope that because the clip Fox News released was so short that maybe there could be some mitigating context to the statement. I found this to be humorous and all too indicative of the massive hypocrisy which Trump has brought out in the right-wing media because, after all, had Barack Obama said anything CLOSE to this, there would be no need to wait for “context” before completely freaking out in a huge way.

As it turned out, Fox News did in fact leave out some important parts of Trump’s response on Putin which did actually provide some added “context.” Believe it or not, Trump’s full statement is MUCH worse than we were originally led to believe.

Here is the key portion of the full interview regarding Putin/Russia which Fox News left out of the original release:

O’Reilly: I don’t know of any government leaders that are killers.

Trump: Well — take a look at what we’ve done too. We made a lot of mistakes. I’ve been against the war in Iraq from the beginning.

O’Reilly: But mistakes are different than —

Trump: A lot of mistakes, but a lot of people were killed. A lot of killers around, believe me.

There are several extraordinary aspects to just these couple of lines and none of them are remotely comforting.

The first is that Trump seems to disagree with O’Reilly’s assertion that none of our government leaders are “killers.” At first, I thought maybe he was thinking about the Clintons and all the crazy conspiracy theories involving their “murders,” which so many of his supporters embraced, but then I realized that after the election he went right back to being very complimentary of his old friends whom he once invited to his third wedding.

Then he laughably and inaccurately claimed, yet again, that he was against the Iraq War from the beginning, which is something his “milkshake buddy” Bill O’Reilly knows is false, but which he made absolutely no effort to correct. The obvious implication here is that Trump believes that we “killed” (as in “murdered,” though based on O’Reilly’s many books, he seems stuck on the word “killing”) innocent people in Iraq in the same way that Putin has done with both his political opponents and civilians in countries which he has illegally invaded.

This assertion is completely absurd and would be outrageous if it was made by a high school social studies teacher at a liberal private school and not by an allegedly Republican president of the United States. Regardless of what you think happened in Iraq, our (Republican) leaders did not kill/murder anyone there. We had every legal right to do what we did because Iraq had been in blatant violation of the United Nations resolutions created after their invasion of Kuwait and the terms of the subsequent cease fire agreement.

Perhaps Trump should ask his biggest fanboy Sean Hannity about the history of what happened with Iraq, assuming Hannity’s post-Trump brainwashing hasn’t made him forget the argument he made hundreds of times on the air back when such principles still mattered to “conservative” media personalities.

O’Reilly, to his credit, did try to push back with the very valid idea that “mistakes” are different than killing. However, amazingly, our president rejected that distinction and reiterated that our country has “a lot” of “killers” and that all we need to know that this is true is that Trump added “believe me” to the end of the sentence.

So, to review, here is what we can conclude about Trump based on less than a minute of remarkable statements regarding Russia:

Some have lamely tried to claim that this isn’t that big of a deal because Trump said something similar to Joe Scarborough on MSNBC last year, but that is silly. He is now the president of the United States and this was not just a tweet or even an ordinary interview, this was part of the Super Bowl broadcast, which is effectively a national holiday in the same realm of the Fourth of July. Making all of this even MORE inappropriate/wrong is that on the same Super Bowl broadcast former President George H.W. Bush (who invaded Iraq the first time and whose son did so the second time under the same legal authority) was coming out of the hospital to toss the coin before kickoff.

Of course, the amazing Super Bowl game (which had many similarities to Trump’s own election) that transpired after the Trump interview will eliminate any real impact from this disastrous comments because, after all, our attention spans are simply too short to focus on such “old” news. Not coincidentally, this is also exactly how we got President Trump to begin with.