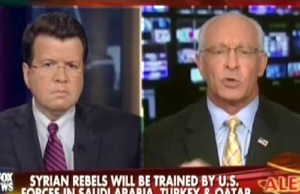 A common question I get when asked what way the publication you’re currently reading leans is always an amusing one. After all, why does every media outlet have to lean anywhere? And in answering said question, I always fall back to Mrs. Gump:

Mediaite is like a box of chocolates…you never know what you’re gonna get.

And that’s true. And it’s the secret sauce as to why we’ve become as popular as we are: It’s a big tent that doesn’t summarily dismiss 50 percent of a potential audience out of the gate. All of that said, periodically the opportunity presents itself to offer up a point-counterpoint on a certain subject, and this always seems to happen with Tommy Christopher, someone whom — as my TV co-host Rick Ungar likes to say — I usually can’t even agree with on what time it is.

Of course, far be it from me to ever try to change Tommy’s mind on anything: you may disagree with his positions or perspective, but the man is remarkably consistent. And in his column he argues it’s now up to other Fox News hosts to take responsibility as Neil Cavuto did in apologizing interviewing time and again the now-discredited Wayne Simmons as a terrorism expert with ties to the CIA. However, both he and Cavuto are wrong.

Cavuto on Friday afternoon said, “If it’s true that all our due diligence and vetting on Mr. Simmons missed this, that’s big, and that’s on me. And only me.” Here’s what makes this apology unique, genuine and something to be applauded: No one was calling for the veteran Fox host specifically to apologize for anything, particularly on the air. But having met Cavuto a few times in doing his show, this I know: he’s one of the few professionals left in a business full of phonies, the self-absorbed and the apology-challenged. He once even sent me a handwritten note to my home thanking me for being on the show and complimenting my TV work and columns here. Note: I’ve done hundreds of guest appearances on different shows over the years starting on MSNBC and continuing to CNBC, Fox, Fox Business, CNN and various radio shows, and the only other person to send a note like that was Jim Nantz (CBS), another Jersey guy. I keep both at my desk as a reminder to do the same when warranted.

So when you hear Cavuto apologize in the fashion he did, while praise is appropriate for doing so, it’s also important to point out that it’s not his fault for having Simmons on his show. It’s also not up to — as Christopher points out — the hosts of Fox & Friends or any other program to apologize for having Simmons on, either. I say this as a host myself who has similar experts (former FBI, CIA) on all the time in a guest/panelist capacity, and it’s not the job of a host/anchor to vet every guest that comes on… as that would be a full-time occupation onto itself. Bottom line: most bookers at cable news networks are right out of college and some depend on booking agencies, which themselves do little vetting outside of a quick internet search. And in Simmons’ case, he had been doing guest appearances on the network since 2002.

Could Fox or any other network who put Simmons on have asked for references in terms of people he’s worked with in the past at the agency? Yes, and perhaps it did. But here’s what Simmons said at one event that could have muddied those waters enough:

Simmons even co-wrote a novel three years ago called “The Natanz Directive” which includes this blurb: “Wayne Simmons just doesn’t write it. He’s lived it.” Who offered up those kind words? Donald Rumsfeld, former Secretary of Defense under President George W. Bush.

So if you’re Cavuto and decide to vet Simmons, wouldn’t that blurb from the guy who ran the DOD for five years be enough, especially if you weren’t skeptical at all in the first place?

From a personal perspective, for example, I had former FBI agent and Navy Seal Jonathan Gillam on the The Daily Wrap twice last week as a panelist, as is usually the case. He’s not paid by Newsmax TV but appears frequently as a guest. You can also catch him on CNN and Fox often several times a week because he’s not exclusive (yet) to any network. Quick tutorial for those outside the bubble: there are frequent guests (like, say Ann Coulter, who isn’t under contract with anyone and therefore can appear anywhere she chooses) and there’s contributors (like, say, Charles Krauthammer, who is under contract with Fox and therefore can’t appear anywhere else without permission). Back to Gilliam, there’s a reason he’s getting as much airtime as he is lately (he’s credible, authentic and knows how to make sound arguments in short fashion). Still, how did I know when the show began back in January that Gillam is who he said he is? (And he is… there’s amble evidence proving it). I didn’t. I was told that by my executive producer during a pre-show meeting and never thought about it again, frankly.

In the end, there’s just so little time in 24/7 news cycles where any given 60-minute weekday program can have up to 15-30 guests per week. You’re free to criticize the “so little time” remark, but that’s just how it is at every cable news network. Will that change because of this situation with Simmons? Hopefully, but even in this case, it would be very difficult to prove Simmons’ claims about his career wrong.

Again, when Cavuto was first told by his producer that Wayne Simmons, terrorism expert with ties to the CIA, was a potential booking, why shouldn’t he believe that? If you watch and listen, he played his role very, very well. He even looks the part. It’s no different from the New York Times getting hoodwinked by Jayson Blair all of those years ago, who reported from locations he wasn’t at (basing said reporting on other reports and fabricating witnesses in some cases) while getting high to the bejeezus on coke back at his apartment. The Times got a ton of criticism once Blair was exposed, and maybe I’m still in the minority here, but how was paper — especially in the beginning — supposed to know what Blair was up to if there were few clues otherwise? If you read his book, Burning Down My Masters’ House, you’ll see just how accomplished he was and the lengths he went to in lying to his bosses and readers.

Same goes for Simmons: He was an exceptionally good liar. He could do deep dives about covert ops like Troy Aikman breaking down a two-minute drill. There was nothing to indicate anything otherwise that he did 27 years of work in ‘Outside Paramilitary Special Operations’ for the CIA. As Mark Zapotosky wrote when reporting this story for the Washington Post,

“Wayne Simmons claimed to be something of an American James Bond, and if you watched TV or ran his name through Google, you’d have no reason to doubt him.”

Zapotosky also reports that Simmons even gained “actual security clearances and real government contracting work in more recent years.” So again, if you’re any host or producer or booker regardless of network, how exactly were you supposed to know he was lying outside of hiring a private investigator, and even that may be a road that turns up nothing? And even if you do that with Simmons, do you then go to the same lengths to vet every guest who appears on your show? Remember, it took a friggin’ federal investigation to expose him. Now, if you’re thinking of hiring a guy like Simmons, signing him to a contract and making him an employee, that’s a different story altogether. But again, Simmons was not a Fox employee, and therefore was in a no-man’s land on the vetting front outside of the aforementioned Google search by twentysomething bookers and/or a booking agency, which is just happy to get the people paying them air time, especially of the national variety.

Neil Cavuto is a standup guy, an old-school professional. An apology here on his show (as opposed to Twitter or a written statement behind a faceless spokesperson) was admirable. It was also unnecessary.

It also won’t be the last time a network is fooled into believing a guest isn’t who they say they are.

And so this concludes our point-counterpoint for this Sunday. On behalf of Tommy Christopher and editors Jon Nicosia and J.D. Durkin, thanks for joining us today. And remember: Mediaite is like a box of chocolates… you never know what you’re gonna get.