ZombiCon Festival Attacked by Gunman, Leaving 1 Dead and Others Injured 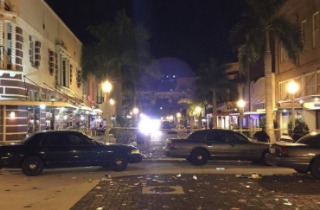 A zombie-themed street festival became a real nightmare after a shooting occurred on Saturday that left one man dead, and four others injured.

The incident occurred at ZombiCon, an annual Florida festival to celebrate music, art and costumed participants, that was reportedly attended by about 20,000 people when the first shots rang out. Talking Points Memo reported that the Fort Myers Police Department responded to the panic at around 11:45 P.M., and later confirmed that Expavious Tyrell Taylor died at the scene.

The four injured have all been attended to, and their conditions have been determined as non-life-threatening.

Attendees and onlookers told the police that panic caused the scene to clear quickly as the police arrived. The department did not say whether any suspects have been taken into custody, but have sent out a public request that anyone with information or footage from the scene should contact them.

“There were a lot of witnesses down here, there were a lot of people taking pictures, videos with their cellphone,” said Lt. Victor Medico. “Anything that could help with this investigation would be greatly appreciated.”

ZombiCon posted a message on its Facebook page expressing sorrow for the tragedy:

The organizers of Zombicon, Pushing DaiZies, Inc. are deeply saddened by the news of what happened within the footprint of our event. We take the safety of our patrons very seriously and take precautions in hiring security and police officers for our annual event. Our prayers go out to the family members and individuals involved in the incident.

You can watch footage from the incident in the video above, via News-Press.