Chris Christie Blasts Obama: What The Hell Are We Paying You For? 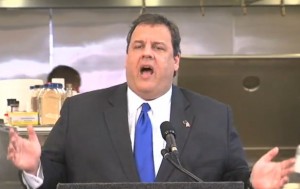 New Jersey Governor Chris Christie, who has already ruled out a run for the Republican nomination, lit in to President Barack Obama in a speech at Cathedral Kitchen in Camden, N.J., on Monday, for his failure to get the Super Committee to strike a deal before the deadline.

Christie was actually at the Cathedral Kitchen — which teaches ex-offenders cooking skills, so they can ease back into the job market — to introduce a new plan of his, which would have some non-violent criminals attend drug and alcohol treatment and counseling instead of going to prison. But the topic veered off into national politics, and Christie took a moment, in the kitchen, to address Obama’s dealing with the now-failed Super Committee:

“I was angry this weekend listening to the spin coming out of the administration,” Christie said. “The President knew it was doomed for failure, so he didn’t get involved. Well then what the hell are we paying you for? What have you been doing, exactly?”

Christie went on to say that both political parties deserve blame for the gridlock and frustration, adding that, “they’re spending more time talking at each other than with each other.” The governor pointed to the example of how he handled things in New Jersey to get things that needed to be done pushed through. “I had people of good will on the other side who said they believed it was their obligation, regardless of party,” Christie explained. “Why the president of the United States refuses to do this is astonishing to me.”