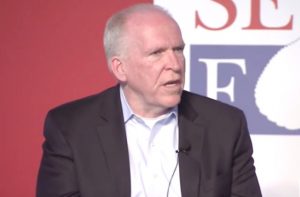 CIA Director John Brennan gave an extensive interview to The Wall Street Journal yesterday in which he responded to the criticisms President-elect Donald Trump leveled at him on Twitter.

Brennan criticized Trump on Fox News Sunday and said he’s not sure he has “a full understanding of Russian capabilities.” Trump tweeted this in response:

much worse – just look at Syria (red line), Crimea, Ukraine and the build-up of Russian nukes. Not good! Was this the leaker of Fake News?

In the WSJ interview, Brennan rejected the idea that he may have leaked that dossier and said, “This is not intelligence community information… I would have no interest in trying to give that dossier any additional airtime.”

He also provided some insight into how Trump was made aware of the dossier in the first place:

“There was an interest on the part of the bureau to make sure that the president-elect was aware of and informed of” the dossier, Mr. Brennan said. “It was not part of the [hacking] report. And it was very explicitly stated that the conclusions of this report in no way took that information [from the dossier] into account. The feeling was wanting to make sure that given the very salacious nature of it, the president-elect was at least aware of it so he could take it into account and do what needs to be done.”

And while Brennan doesn’t think it’s wrong for the president to challenge the intel community on occasion, he does think Trump crossed a line with this tweet:

Intelligence agencies should never have allowed this fake news to "leak" into the public. One last shot at me.Are we living in Nazi Germany?

“Tell the CIA officers,” Brennan responded, “who are serving in harm’s way right now and their families who are worried about them that they are akin to Nazi Germany. I found that to be very repugnant, and I will forever stand up for the integrity and patriotism of my officers who have done much over the years to sacrifice for their fellow citizens.”