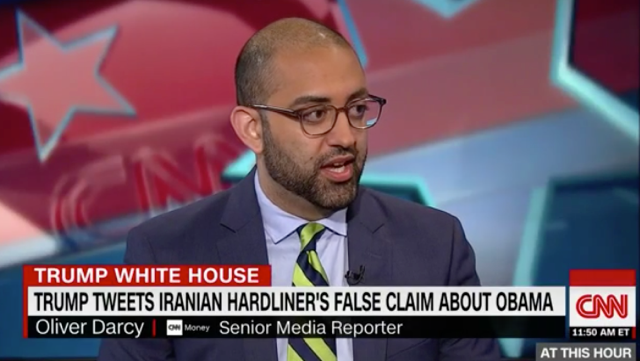 The report from Fox’s media reporter Brian Flood highlights a number of Darcy’s old tweets in which he mocked and critiqued CNN before the network hired him in 2017. Flood highlighted numerous tweets where Darcy cracked jokes about CNN’s coverage over the years, and in one notable instance, he quoted a Daily Wire reporter who noticed a tweet in which Darcy supposedly accused CNN of making things up.

CNN’s Oliver Darcy, who regularly bemoans any attacks on the media, attacked CNN before joining the network.https://t.co/u7VpzMByos pic.twitter.com/DDY1MIcKiB

Darcy has taken notice of Flood’s piece, and he’s calling the article a misrepresentation of tweets.

I never accused CNN of “making stuff up on its airwaves,” as Fox’s @briansflood wrote. I tweeted in 2016 about pro-Trump commemorators making things up on CNN airwaves and wondered at what point do you not allow them to come on air and do so. Fox’s framing is extremely dishonest. https://t.co/JuzzckHWko

CNN also released a statement of their own, knocking Fox News for being stunned by the idea of hiring a media reporter who criticized them in the past.

CNN’s statement to Fox News re: @oliverdarcy’s old tweets about CNN: “We encourage staff to share their thoughts about the organization – both positive and critical. While this might seem like an exotic concept to you, we’d headline it ‘Media Reporter Does Job.’” pic.twitter.com/6X5uSumNoe