Anderson Cooper To Host Syndicated Talk Show In Fall 2011; Re-ups With CNN Too 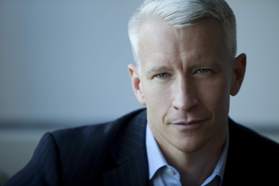 Anderson Cooper is adding a daytime talk show to his busy schedule, signing a deal to host a one-hour syndicated program for Warner Bros. and Telepictures beginning in Fall 2011.

He stays on with CNN, and according to CNN President Jim Walton, he’s “extended his relationship” with the network in a new multi-year deal. All the details after the jump:

The news was first reported by James Hibberd of The Live Feed.

According to the WB release:

Cooper will address water cooler topics and interview the real people, populist newsmakers and celebrities behind these stories. From undercover investigations to hidden camera experiments, the show will give the audience new perspective in an effort to gain insight into relevant issues and social trends affecting women’s lives. In addition, Cooper will hold town hall meetings on hot button issues from race to infidelity to Internet predators.

The full release is below.

CNN released this statement from CNN Worldwide President Walton: “I am pleased that Anderson Cooper has extended his relationship with CNN and will be with us for years to come. I am also pleased to congratulate Anderson on his new relationship with Telepictures. We think it will be good for Anderson, good for CNN and good for Time Warner.”

And Cooper says, “I remain as committed as ever to my program on CNN, and will be with CNN for years to come.”

Earlier this month we talked to Cooper about hosting daytime talk shows. Check it out here. Also, this ends all speculation about him going to CBS to host the Evening News, but no word yet if he will continue what would now be a third TV job – contributing to 60 Minutes.

We’ll continue to examine the implications for Cooper and CNN, but for now, here’s the full details:

“Over the course of the past few years, I’ve had the opportunity to work on a number of daytime programs,” said Anderson Cooper. ” It’s fun and interesting to work in daytime television. The format is unique and you can really go in-depth on a wide range of fascinating and compelling stories. With this new program I hope to relay important information and relate to people and the audience in a completely different way. It’s an exciting opportunity to show another side of myself and create something worthwhile and special in daytime.”

“There is a great opportunity in the marketplace for this type of show,” said Ken Werner, President, Warner Bros. Domestic Television Distribution. “Fall ’11 begins a transition period when long established franchises are leaving the air and making way for a new generation of shows. Anderson Cooper is one of the most distinctive voices of the next generation of television. His popularity and skills uniquely position him to be the next big syndication franchise.”

“The hallmark of Telepictures’ success has been attracting iconic talent and building franchises based on their personalities. From my early days working with Rosie through our success with Ellen, we have been able to identify great talent at the right time that fills a void in daytime. Anderson fills that void today, and I’m thrilled that we’ll be welcoming him to the Telepictures family. Anderson is one of those rare talents that has a relatable and authentic persona, a keen sense of humor and intelligence and has already demonstrated his ability to resonate with daytime viewers,” said Hilary Estey McLoughlin, President, Telepictures Productions.

Cooper will bring his passionate voice and personal perspective to a topical daily talk show that will tell the stories that are capturing the daytime audience’s attention. The show will have a broad palette that will cover social issues, trends and events, pop culture and celebrity, human interest stories and populist news. Cooper will tap into his compassion and fascination with the human condition and share compelling and provocative personal stories and tackle the issues that will stir debate while bringing his humorous take on what is top of mind for the daytime audience.

Cooper will address water cooler topics and interview the real people, populist newsmakers and celebrities behind these stories. From undercover investigations to hidden camera experiments, the show will give the audience new perspective in an effort to gain insight into relevant issues and social trends affecting women’s lives. In addition, Cooper will hold town hall meetings on hot button issues from race to infidelity to Internet predators. When there is breaking news, he will take the audience along with him right into the eye of the storm, as he goes beyond the headlines and into the lives of those affected. The show will feature audience participation both in the studio and live chats with home viewers. Like his predecessors Oprah Winfrey and Phil Donahue, Anderson Cooper will create a daily destination for multiple generations of women looking to be informed and entertained, gain perspective, and stay connected to each other and the world around them.

Cooper will continue to anchor CNN’s “Anderson Cooper 360,” a provocative alternative to the typical network evening newscast, airing weeknights at 10 p.m. ET. Cooper joined CNN in December 2001 and served as CNN’s weekend anchor before moving to prime time in March 2003 following the war in Iraq. In addition to reporting for CNN, Cooper, an award-winning journalist, also provides reports for CBS’s “60 Minutes.” Dispatches from the Edge, Cooper’s memoir about covering the South Asia tsunami, Hurricane Katrina and other news events, topped the New York Times Bestsellers List and other bestseller charts. Before joining CNN, Cooper was an ABC News correspondent and host of the network’s reality program, “The Mole.” He anchored ABC’s live, interactive news and interview program, “World News Now,” as well as providing reports for “World News Tonight,” “20/20” and “20/20 Downtown.”

Cooper graduated from Yale University in 1989 with a Bachelor of Arts degree in political science. He also studied Vietnamese at the University of Hanoi.

The show will be based in New York City and produced by Telepictures Productions in association with StrongChild Productions and Anderson Cooper will serve as an Executive Producer.