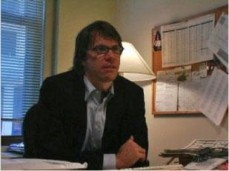 In a bit of a surprise move Bill Keller has announced that Hugo Lindgren will be taking over as editor of the New York Times Magazine beginning Oct. 25. Lindgren will replace longtime editor Gerald Marzorati who announced his departure earlier this year.

According to John Koblin at the NYO Lindgren was hired after New Yorker Features editor Daniel Zalewski, long-rumored to be up for the job, turned it down and “it was expected that executive editor Bill Keller would hire from within the Times newsroom.” Nope.

As Keller notes in his memo Lindgren previously worked at the Magazine under Adam Moss before following Moss to New York and then leaving earlier this year to take over as executive editor of Business Week. Koblin speculate that the hire sets up “an intriguing rivarly” between the Times Magazine and New York and with the Times high profile hiring of Sally Singer from Vogue to take over T Magazine earlier this summer one gets the sense the Times may be aiming to use their in-house magazines to compete with free-standing ones such as New York and W (where former T editor Stefano Tonchi took over earlier this year). Keller’s full memo below.

To the Staff:
Our search for the next editor of The New York Times Magazine has taken us to some of the masters of the genre and introduced us to some exciting dark horses. We have considered strong candidates within the paper and without, and enjoyed much discussion of what this journalistic treasure should be in its next incarnation. I’m quite delighted to report that the search ends now with Hugo Lindgren – a gifted editor who has helped breathe new life into two magazines and is fully ready to run his own.
It is something of a homecoming. Hugo worked at our magazine, helping invent “The Way We Live Now” franchise. He was lured away by Adam Moss when Adam moved to New York magazine. In March he assumed the executive editor job at Business Week after that troubled book was bought by Bloomberg and began a revival. He has written (extremely well) about business, architecture and pop music.
Hugo, who is 42, grew up in Manhattan, attended Trinity and Duke, and lives here with his wife, the writer Sarah Bernard, and their twin daughters.
“He’s very smart, wildly creative and charismatic,” says one editor who has worked closely with him. “People like him and want to do their best work for him. He just has a great magazine head.”
The search took longer than I anticipated because there were so many credible candidates, but I could not be happier about the outcome.
Hugo will move in October 25.
I want to particularly thank Gerry Marzorati for keeping the magazine on form during our successor search while simultaneously taking up his new role as the newsroom’s master entrepreneur and, not incidentally, blogging the U.S. Open. This Sunday’s issue, with the cover on Glenn Beck, is a reminder that Gerry will be a hard act to follow. And my gratitude extends to Alex Star and the rest of the magazine staff for their energy, devotion, high standards and patience during this protracted process.
Best, Bill