CNN’s New Host: If You Legalize Marijuana, Then You Have To Release Everyone In Prison On A ‘Weed Charge’
VIDEO

CNN’s New Host: If You Legalize Marijuana, Then You Have To Release Everyone In Prison On A ‘Weed Charge’ 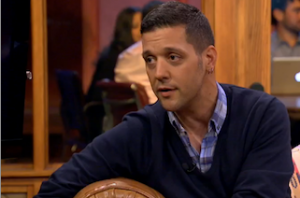 Canadian talk show host George Stroumboulopoulos makes his debut on CNN with a new weekly show this Sunday before moving to Friday nights at 11pm ET. But before he begins his new gig, Stroumboulopoulos sat down with HuffPost Live’s Jacob Soboroff and shared his perspective on the U.S. drug war.

Stroumboulopoulos prefaced his statements on marijuana decriminalization by saying he doesn’t “rock the ganj” and actually considers himself “straight edge.” But he does think that if the U.S. did decide to legalize marijuana it would have to be retroactive as well as forward-looking. “If you’re going to legalize it, that’s fine, but then you’ve gotta go into jail and you’ve got to get everybody in there who’s on a weed charge and you’ve got to get them out… I think it’s a mistake to throw people in jail for rolling a joint.”

Asked why he thought Canadian kids smoke the most marijuana of any population in the Western world, as a UNICEF study recently found, Stroumboulopoulos said it’s probably because of the proximity to British Columbia, but also guessed it could be because “we don’t have a lot guns.” Either way, he said, Canada is a “more chill situation.”

Much like Bill Maher‘s Real Time show on HBO, Stroumboulopoulos’ Friday night program on CNN will tape in Los Angeles in front of a live studio audience and feature prominent public figures tackling the news of the week.