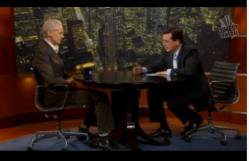 Last night Stephen Colbert interviewed Julian Assange, the founder of Wikileaks, which the other week published video of US Military killing 12 individuals in Iraq, two of whom were later revealed to be staff members of the Reuters. It was exactly the sort of interview which demonstrates why Press Sec. Robert Gibbs would be happy to have President Obama appear on The Daily Show but not on Colbert: unlike Jon Stewart, tough interviews tend to bring out the underlying sharpness and seriousness in Colbert. Last night was no exception.

After a sort of jokey opening in which he had his face pixelated and voice altered Colbert got down to business.

Let’s talk about this footage that has gotten you so much attention recently. This is footage of an Apache helicopter attack in 2007. The army described this as a group that gave resistance at the time, that doesn’t seem to be happening. But there are armed men in the group, they did find a rocket propelled grenade among the group, the Reuters photographers who were regrettably killed, were not identified…You have edited this tape, and you have given it a title called ‘collateral murder.’ That’s not leaking, that’s a pure editorial.

And that’s not satire, that’s hardcore journalism. Assange, meanwhile, did not appear to be at all put off by the tone of the questions, admitting that the point of the video — including the editing and the title — was to gain as much political impact as possible. In fact, he goes on to point out that the full unedited material is available to the public in order that they may draw their own conclusions. “I admire that,” says Colbert, noting that by putting ‘Collateral Damage’ on the first thing the public see “you have properly manipulated the audience into an emotional state you want before something goes on the air.” Snap. Again Assange is unfazed; this is a man who clearly believes in his mission. Video below.