O’Reilly: I Cover Less African-Americans For Fear Of Racism Charges 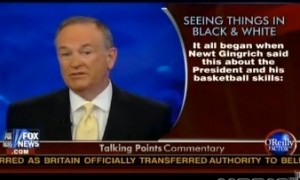 Former Speaker of the House and potential 2012 Republican candidate Newt Gingrich made some news this weekend at his “Real Jobs Summit,” when he commented about President Obama’s proclivity for playing basketball in his off time, in light of very high unemployment rates. MSNBC’s Norah O’Donnell saw racial insensitivity in the comment; Bill O’Reilly called foul, and admitted how his coverage has changed since receiving charges of racial insensitivity.

O’Reilly opened last night’s show with Talking Points that set up the controversial comments by Gingrich/O’Donnell, then followed with a panel of frequent contributors Mary Katherine Ham and Juan Williams. It was in this segment that O’Reilly admitted that he shies away from covering African-American figures for fear that he will be taken to task, and cited a radio segment he recorded in 2008 with Al Sharpton, in which the two dined at Sylvia’s, a famous restaurant in Harlem.

In a serious vein and we talked about this with the infamous Sylvia’s deal a few years ago, I, and many other white journalists, now don’t do nearly as many reports on African-Americans or their problems because we don’t want to be put in a situation where our opinion is taken out of contest, rammed down our throat as media matters and all these other sleazeoids do. if it’s a big thing or optional thing I’m not doing it anymore. If I go to the a primarily black restaurant very fine in Harlem. I’m not going to say anything about it anymore which is not good for Sylvia’s because she got a lot of good publicity from that.

It’s worth noting that, during that somewhat notorious radio segment, O’Reilly commented to his then Radio Factor Lis Wiehl, that he was shocked at the politeness of the mostly black crowd at the famous soul-food eatery. “There wasn’t one person in Sylvia’s who was screaming, ‘M-Fer, I want more iced tea,” was his specific quote that raised eyebrows, perhaps most notably by liberal media watchdog Media Matters.

Perhaps Media Matters will take a critical eye towards O’Donnell’s analysis on Gingrich’s comments when she claimed that “some people may suggest that all blacks are good athletes.” One can only wonder the uproar that would ensue if O’Reilly had uttered those words instead of O’Donnell.