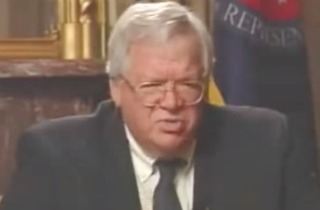 Wheaton College has pulled the name of graduate Dennis Hastert from its public policy center amid Hastert’s prosecution and scandal over possible past sexual misconduct.

The former Speaker of the House was charged with bank fraud and lying to the FBI, and was allegedly paying off someone to conceal past sexual misconduct when Hastert was a high school wrestling coach.

Wheaton released a lengthy statement explaining the decision, which you can read here:

It is with sadness and shock that the Wheaton College community learned of the indictment by the U.S. Department of Justice of alumnus and former speaker of the U.S. House of Representatives J. Dennis Hastert, and of his resignation from the Board of Advisors of the J. Dennis Hastert Center for Economics, Government, and Public Policy at Wheaton College.

In light of the charges and allegations that have emerged, the College has re-designated the Center as the Wheaton College Center for Economics, Government, and Public Policy at this time.

The Center will continue in its mission “to advance the training of Wheaton College students and the greater community in the understanding of market economies, representative democracies, limited government, and the redeeming effects of the Christian worldview on the practice of business, government and politics.”

Wheaton College serves Jesus Christ and advances His Kingdom through excellence in liberal arts and graduate programs that educate the whole person to build the church and benefit society worldwide. The College has not been implicated in or associated with any of the allegations in this matter.

We commit ourselves to pray for all involved, including Speaker Hastert, his family, and those who may have been harmed by any inappropriate behavior, and to continue the work and mission of the Wheaton College Center for Economics, Government, and Public Policy.