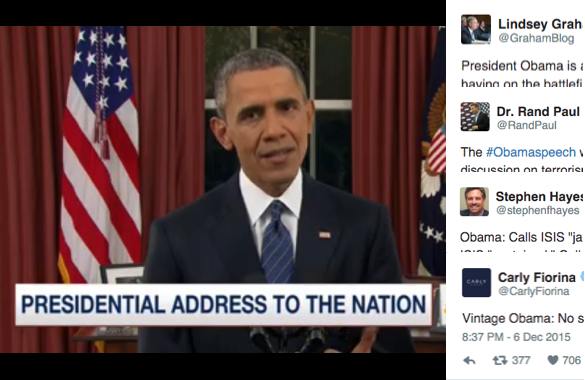 President Barack Obama spoke to the nation on Sunday night in a nationally televised address from the Oval Office, addressing the increasing concerns over Islamic radical terrorism. The brief speech largely addressed the aftermath of Wednesday’s deadly shooting in San Bernardino, California that has since been linked to ideologies of extreme jihadism.

Many cable news pundits and elected officials took to Twitter immediately following the address to air their thoughts on the President’s handling of the situation. May members of the media including Fox News’ Eric Bolling and MSNBC’s Joe Scarborough seemed to echo similar sentiments:

God. Is this guy really going to be responsible for our fight against ISIS for the next year? Political platitudes replace military strategy

America wanted to hear Obama’s strategy to defeat ISIS & to keep us safe here at home. Instead we got a gun lecture and speech on tolerance — Eric Bolling (@ericbolling) December 7, 2015

Several of the GOP Presidential candidates vying for the White House in 2016 also used the opportunity to frame their own viewpoints in opposition to the President’s. Twitter was again the perfect platform for Carly Fiorina, George Pataki, and Rand Paul to sack Obama’s messaging:

The #Obamaspeech was an attempt to turn a necessary discussion on terrorism and national security into a ineffective gun control debate.

Vintage Obama: No strategy, no leadership. Politics as usual.

President Obama is also overselling the successes we are having on the battlefield. His strategy will not destroy ISIL and he knows it.

#Obamaspeech was as believable as a hostage video. Pathetic response to the worst attack on US since 9/11

Sunday night’s speech by Obama was also the turf for the latest and greatest from Republican frontrunner Donald Trump, who promised to live-Tweet the speech. The business magnate treated his 5.11 million Twitter followers to his reactions, including the following:

The podium in the Oval Office looks odd! Not good, but the words will be the key.

“@JFK4701: @realDonaldTrump he is reading off the TelePrompTer.” But that is O.K. in this case.

Is that all there is? We need a new President – FAST!