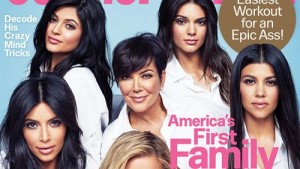 The cutting edge of print journalism that is Cosmopolitan labeled the Kardashians as “America’s First Family” on the cover of its 50th anniversary issue in November. Needless to say, America (i.e. Twitter) does not agree with this sentiment, and has taken it upon itself to educate the half-a-century-old magazine.

According to Uproxx, 16 pages of next month’s issue are dedicated to the family clan made famous by sisters Kim and Khloe‘s exploits in reality television, smartphone apps, and many, many other business endeavors. At this point, the Kardashian family is no longer a family — it’s a brand.

Whether or not this qualifies them as “America’s First Family,” however, remains to be seen. Especially since the phrase is generally reserved for the sitting President of the United States and his or her family.

The Kardashians themselves are celebrating, of course:

Happy 50th Birthday @cosmopolitan So excited to be on the November cover with my family!!!! 📷 @francescocarrozzini pic.twitter.com/8WN2K1DC3J

My reaction to The Kardashian’s being called “America’s First Family” by @Cosmopolitan pic.twitter.com/xpCLVLJOKd — Bryan (@Bryan4King) October 5, 2015

That Kardashian “America’s First Family” cover is just proving how garbage @Cosmopolitan is.

Not one person of influence at @Cosmopolitan thought that the ‘Kardashian America’s first family’ would get negative response not one? — Sass Queen (@QueenOfSass) October 5, 2015

America’s First Family doesn’t include a Kardashian or a Jenner… They are OBAMA’S!! Just… https://t.co/jxcczCZCSp

This is also why your editorial staff cannot be full of white girls. Or that one Black person who is afraid of losing her job.

No word yet on what the anti-Kardashian Good Day Orlando anchor thinks about all this.