Everyone Talks Big Game on Mental Illness; Here’s the One Candidate Doing Something About It

Everyone Talks Big Game on Mental Illness; Here’s the One Candidate Doing Something About It 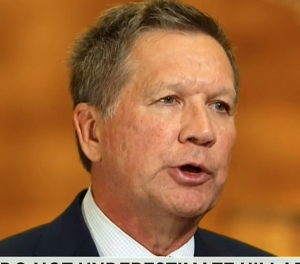 An overlooked moment in the first GOP debate on Fox was an interesting exchange between Megyn Kelly and Ohio Governor John Kasich. The theme of the Fox debate from a questions perspective seemed to feature each candidate answering for a controversial position or past statement. And in Kasich’s case, Kelly pressed him on taking Obamacare money available to him for his state.

KELLY: You chose to expand Medicaid in your state, defended your Medicaid expansion by invoking God, saying to skeptics that when they arrive in heaven, Saint Peter isn’t going to ask them how small they’ve kept government, but what they have done for the poor. So why should Republican voters, who generally want to shrink government, believe that you won’t use your Saint Peter rationale to expand every government program?

KASICH: — first of all, Megyn, you should know that — that President Reagan expanded Medicaid three or four times.

Secondly, I had an opportunity to bring resources back to Ohio to do what?

To treat the mentally ill. Ten thousand of them sit in our prisons. It costs $22,500 a year…

KASICH: — to keep them in prison. I’d rather get them their medication so they could lead a decent life.

Secondly, we are rehabbing the drug-addicted. Eighty percent of the people in our prisons have addictions or problems. We now treat them in the prisons, release them in the community and the recidivism rate is 10 percent and everybody across this country knows that the tsunami of drugs is — is threatening their very families.

So we’re treating them and getting them on their feet. And, finally, the working poor, instead of them having come into the emergency rooms where it costs more, where they’re sicker and we end up paying, we brought a program in here to make sure that people could get on their feet.

And do you know what?

Everybody has a right to their God-given purpose.

And finally, our Medicaid is growing at one of the lowest rates in the country. And, finally, we went from $8 billion in the hole to $2 billion in the black. We’ve cut $5 billion in taxes…and we’ve grown 350,000 jobs.

The question was a fair one, and one that Kasich has answered for the past two years and especially since announcing his candidacy for president. His answer is not only a pragmatic one, but one that makes it a question of Christian morality. Of course, the answer is almost seen as sacrilegious among those to this right in the party. According to Politico, when Kasich spoke at a meeting of wealthy donors hosted by the Koch brothers 18 months ago, 20 people in the audience stood up and walked out.

Fast forward to two months after the debate, and here’s what we’re hearing from prominent Republicans on the issue of mass shootings (paraphrasing): It’s not gun control that is the issue, it’s mental health. No argument there, as the guns used in Oregon and Virginia (the journalists murdered on air) and Charleston (church massacre) were all purchased legally. And even when applying the most stringent of gun measures being proposed, these shootings would have still occurred.

That’s not to say you simply punt on the issue of gun control, and proposals like the one Hillary Clinton is offering up (treating gun shows as businesses; a repeal of the legal immunity that gun manufacturers and dealers) should be embraced or at least open to debate. This isn’t a one-answer solution and therefore cannot be treated like one.

But when it comes to actually having a record of trying to tackle mental illness, not one of the 20 candidates running remotely approaches Kasich’s record in Ohio: he’s expanded behavioral health services in 54 counties. The coverage also pays for medications for people coping with mental illnesses such as schizophrenia and bipolar disorder.

“Reese (one of Kasich’s daughters) and I were watching 60 Minutes one Sunday and they were having this story of them locking the mentally ill up in the prisons,” Kasich explained in a speech in Georgia earlier this year, “And she looked at me and she said, ‘Daddy, why are those people being locked up?’ I couldn’t answer her satisfactorily, other than to say, ‘We seem to ignore these people,'” “Now I don’t know how many of you know people who struggle with these illnesses but if you’ve got a problem with schizophrenia and you find yourself in a prison? It’s a disgrace in this country.”

Another disgrace is media coverage around mass shootings once the initial reporting is complete. It’s all about Jeb Bush’s inelegant “stuff happens” or Trump’s “What are you gonna do?” comments taken completely out of context and exploited because of the Republicans just don’t care as much as the rest of us meme, or something ridiculous like that. Our media business model is built now on assigning blame in addition to and almost equally to the actual guilty party these days, and that blame usually has a political component to it.

And while all of this is happening, we avoid real debate, real conversations. Cable news loves to run to the likes of Trump or Carson or Huckabee for the juicy soundbites instead of going to the sober and pragmatic (and therefore in the eyes of some, boring and not worthy of breaking up the food fight) in the form of John Kasich.

You know…the guy with an actual track record when it comes to tackling the exploding problem that is mental illness in this country.