‘Cringing So Hard’: Twitter Reacts to Trump Asking Cabinet Members to Praise Him 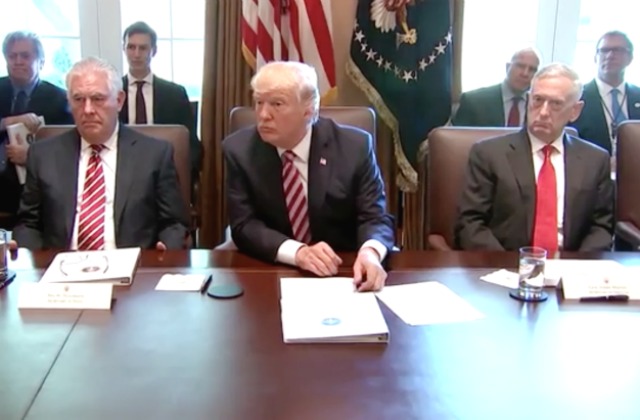 We already know how Chuck Schumer reacted to President Trump‘s cabinet meeting from earlier today, but lets take a look how people on Twitter are taking it, shall we?

The president convened with his advisers at the White House on Monday, though things took a really bizarre turn when Reince Priebus and other surrogates went around the table and sung Trump’s praises. While this might have been the cabinet’s way of assessing the Trump presidency so far, it would seem there were a lot of people who looked at it and saw either celebration of narcissism or a contest of who could be the biggest kiss-up:

Trump Cabinet meeting was like an episode of "Apprentice": Each person trying to outdo the last in praise of Trumphttps://t.co/caogFBV14R

Trump cabinet meeting is a fascinating depiction of what seems to be a meeting to pat Trump on the head and tell him he's a good boy.

Can anyone who saw groveling session of a Cabinet mtng, were everyone sucked-up to Dear Leader, doubt Trump asked Comey to pledge loyalty??

The approval rating among cabinet members is sky high. https://t.co/ysBCjqSsnD

So? It's only decent to say grace before you swallow your dignity. https://t.co/KXIlX6hq9a

With tough love like this, it's shocking that they can't get Trump to act presidential… https://t.co/oH0OS5dYy6

"And the Lord was pleased, and bestowed much favor upon Reince Ben Richard, until he was wroth with him." https://t.co/zEY67f3cc2

This interminable cabinet spray, where everybody pays tribute to Trump, is one of the most exquisitely awkward public events I've ever seen.

He absolutely would never ask anyone for loyalty though. Completely out of character. https://t.co/hVldvLyOtn