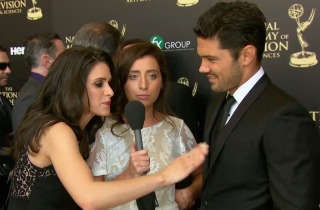 No one really watches the Daytime Emmys (it was yesterday and it was livestreamed online, not broadcast on TV), so perhaps it’s that lack of viewership that allows people to get away with a teeny bit more than they normally would. Case in point, one of the hosts of the Daytime Emmys Red Carpet event yesterday turned some heads online with a very strange and cringeworthy rape joke.

Brittany Furlan and Lauren Elizabeth were engaging in some light and extremely suggestive banter with General Hospital castmember Ryan Paevey that involved some mentions of handcuffs. At the end of the interview, Furlan said, “We’re going to get you away from us before we rape you.”

There were a few other lines that drew attention (asking an African-American actor “What’s it like to be a black man on a soap opera these days?”, for one), but the rape line really, really stuck out on social media.

"We're going to get you away from us before we rape you" Are you two a bunch of idiots? #DaytimeEmmys

"We're going to get you away from us before we rape you". DID SHE ACTUALLY SAY THAT? SHAME. #DaytimeEmmys

If a male red carpet host told a hot female he wanted to rape her, he'd never work a day in his life again. #JustSayin #DaytimeEmmys

You can watch the clip below, via the Daytime Emmys: