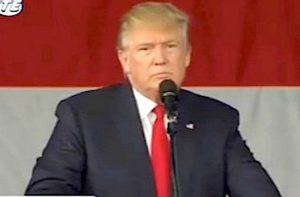 Democrat politicians across the country have gotten so comfortable running lawless, sanctuary cities under the Obama presidency, that they are now daring President-Elect Donald Trump to stop them. Get ready to be stopped. The truth has yet to sink in for Democrats — that Trump never backs down.

High-and-mighty Democrats like DC Mayor Muriel Bowser and Chicago Mayor Rahm Emmanuel declared that they will defy any mandate by Trump to enforce our federal immigration laws.

These defiant Democrats might as well be telling our new commander in chief, “to hell with America, we’re gonna make sanctuary cities great again!”

If Trump had been the first black president elected, and the mayors were Republican, no doubt the media would call them racist. But because these clowns are Democrats, and it’s Trump — the liberal media is heaping accolades on their self-serving efforts to protect “the undocumented.” (By definition, a person who illegally enters the US, and doesn’t have papers to show he is a citizen, is a criminal, non-citizen, who should be deported.)

More ludicrous than the alternate universe in which the liberal media lives — particularly after the 2016 election– are the reasons Democrats give for sheltering criminals (some of whom are violent felon, repeat offenders).

“We know that our neighborhoods are safer and stronger when no one is afraid to call on our government for help, and when our police can focus on protecting and serving,” Bowser exclaimed.

There’s also the inconvenient fact that welcoming an illegal workforce to cities like DC only increases the chronic unemployment for blacks, which is always double the nationwide number. Yet Bowser claims running a sanctuary city keeps America safe. She’s the poster child for why DC should never get statehood.

But Boswer’s not alone in her utter anti-American stupidity.

“To all those who are, after Tuesday’s election, very nervous and filled with anxiety as we’ve spoken to, you are safe in Chicago, you are secure in Chicago, and you are supported in Chicago,” a puffed up Emmanuel boasted. “Chicago will always be a sanctuary city.”

Well anyone with a functioning brain knows Chicago ain’t safe. Homicides have hit a record high this year of 600 and counting. So Emmanuel figures giving safe haven to criminal illegals will make Chicago safer how?

These are the people running America’s most populous cities who are not making America safe or great for the citizens. There are more than 400 counties or cities designated as sanctuary cities where police chiefs and mayors make protecting illegal aliens more of a priority over ensuring the safety of America citizens.

“This is about doing what is right,” declared Democrat Montgomery County, MD Executive Isiah Leggett. “So from my perspective, if I’m faced with the choice of having to lose some federal dollars and run the risk of having our citizens treated in an undignified way, disrespected and hauled off to jail and separated from their families, then I’ll have to lose the dollars,” he added.

A few things Leggett may want to understand. First, that upholding the law is the right thing to do; second, federal law trumps local (see The Supremacy Clause – Article VI of the Constitution); third, a person who lives in America illegally is NOT a citizen entitled to our rights — he or she is a squatter.

As President Barack Obama bleated in January of 2009, elections have consequences. And that applies even when a Republican wins the White House. Last year, Trump’s vow to deport illegal aliens from America ignited his campaign and became one of his key policy planks. Trump must decisively follow through on his promise — by using executive order if necessary, to withhold federal funding for infrastructure and education to jurisdictions that defy him.